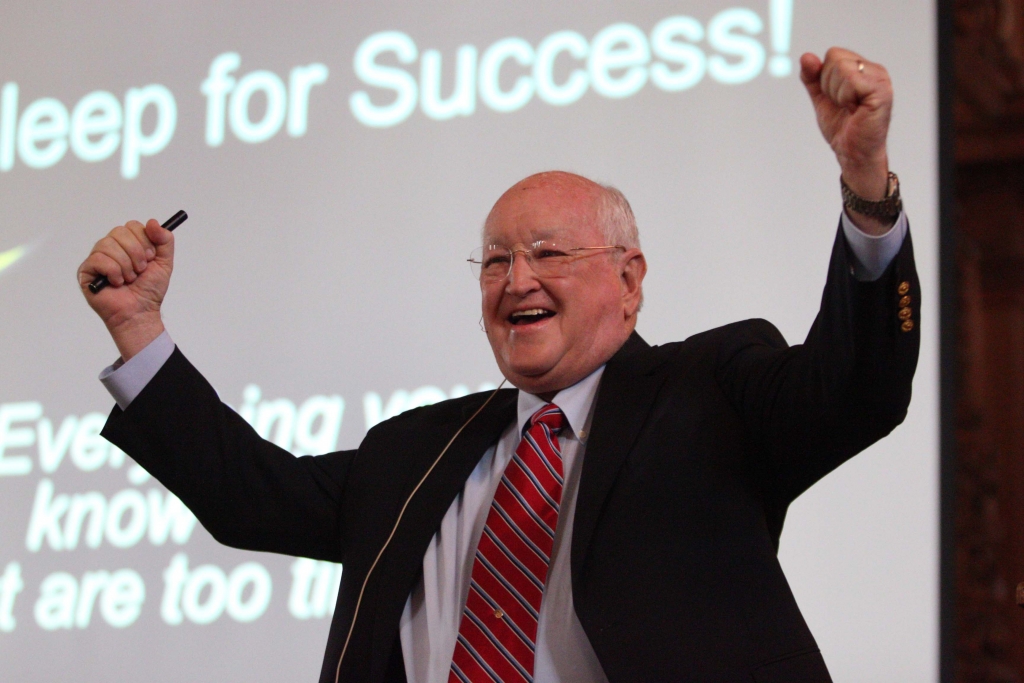 Dr. James B. Maas, who served as the Stephen H. Weiss Presidential Fellow, Professor and past Chairman of Cornell’s Psychology department, returned to campus this morning for the first time in over a year. Maas is best know for his academic and literary work on the psychology of sleep.
Today, at 10:10 am in Bailey Hall, the over 700 students enrolled Psych 1101 watched in disbelief as Prof. Maas took the stage and began to lecture.  Bill, a freshman in Psych 1101 who witnessed Prof. Maas’ return told CU Nooz, “He was just there, you know?  He pushed Professor Pizarro off the stage, and just talked.”  This was the first time Prof. Maas lectured for Psych 1101 in two years after having previously taught the class for 48 years.

James Maas’ appearance was met with thunderous applause before he began to lecture quickly, in what one student described as a “wild ramble,” explained that he had spent the past year hibernating, and that hibernation is the secret to success.  Prof. Maas ran from one side of the stage to the other looking well-rested and glowing as he continued to explain that he was no longer convinced that sleep was just enough, but that humans should hibernate to achieve full rest, relaxation, and maximum alertness during waking hours.  Prof. Maas said to the class, “Sleep deprivation is human for us, but hibernation makes us super human.”
He continued while pounding his fists on the podium, “We will be smarter, happier, and more powerful if we hibernate.”  Prof. Maas did go on to explain that it could take over one year of hibernation to fully recover from the sleep debt the average college student accumulates over four years, this could be even longer for the average Cornell student.  He then unveiled his new book, Hibernate for Success: The Power of Hibernation or: How I Learned to Stop Worrying and Never be Tired Again, would be on sale after the lecture just outside of Bailey Hall.

Prof. Maas then went behind the curtain of the stage as all of Bailey Hall fell silent, and returned wheeling out a bed with a king sized mattress.  He explained that the mattress was designed by him and a team of scientist to maximize hibernation.  He then proceeded to point at members of the audience and called them up to join him on stage and “feel” the difference of his special mattress.  James Maas then took off his suit to unveil a full one-piece set of footed pajamas, and he climbed into the bed, encouraging all students pursue hibernation in order to achieve success.  Then from the seat of his bed on the stage of Bailey Hall, he called up whoever wished to join him as he began to fall deep into hibernation.