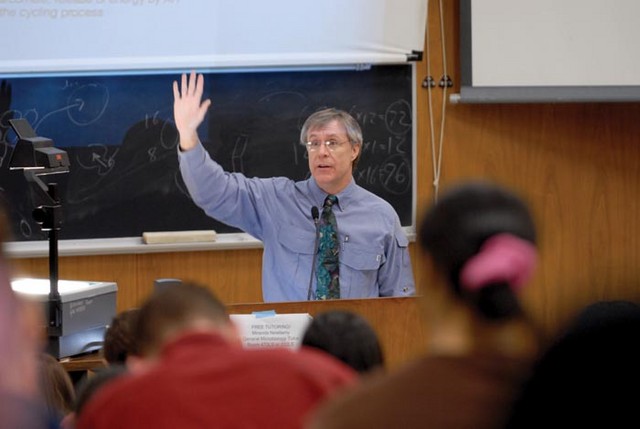 ITHACA, NY-Professor James Karpman began his fourth lecture of the semester today by continuing to review the fundamental plans and curriculum outlines for BIO 2380. Students are reportedly getting restless at the professor’s thoroughly detailed overview of his course plans for the semester.

“On the first day we went over the basics of what units we’re going to cover, and Karpman detailed his office hours and contact information, so that made sense,” explained junior Alex Billford, ”but then he spent the entire next lecture explaining how to use Blackboard and going over the code of academic integrity.”

The following Monday Karpman devoted 35 minutes of lecture to explaining his grading scheme, with 8 minutes devoted specifically to explaining why a 96 is only an A but a 97 gets you an A plus. “We thought we might be let out early” recalled senior Michael Chen, “but then he had every TA stand up and share with us their name, home town, fun fact, and complete weekly schedules. We ended up being held 20 extra minutes late.”

Today, Karpman plans on reviewing correct style and formatting for paper submissions, as well as his policies for late assignments and sick days, and why laptops aren’t allowed in class. “That last one includes an earnest speech on the power of the pen and paper as a learning tool and how you kids are really just too caught up in the world of technology. I mean when I was in college…”

Student’s were also disappointed to hear that the next lecture would include lessons on proper iClicker use as well definitions regarding the metric system. Billford explained to his students that “the metric system is the standard measurement  we use in the class thus it is only appropriate we discuss conversions as such,” before going off on an informative tangent regarding “proper sitting posture” and “bathroom break policy.”

Students report that Karpman’s struggle with time constraints may extend beyond his lecture material. According to Billford, “He usually spends the first 10 setting up the projector and taking attendance. Then he takes attendance again at the end of class. I’m not sure what exactly he’s checking for or if attendance even counts for our final grade. I think we’re going over that next week.”