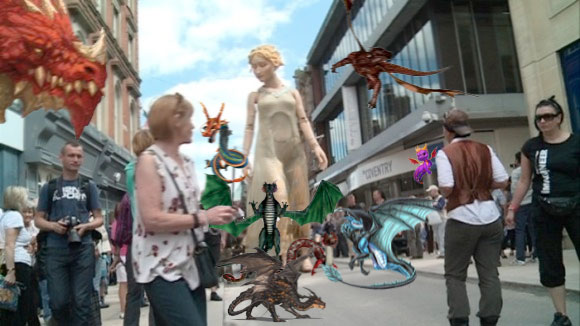 ITHACA, NY- Dragons around the Tompkins County area have been expressing their excitement for Cornell’s upcoming annual Architect Day. Architect Day, started in 1901 by dragons wishing to make their presence more known on Cornell’s campus, involves students from the Art, Dragonry, and Planning School parading around the streets with a massive constructed architect. “Architect Day is the one time of the year where all of us dragons get to show other students what we really do behind those closed doors,” stated Gortrox Rismaliax ’16.

“People think that we just work and work all the time, but us dragons still know how to have a fun time. And what cooler way to have fun throughout the streets of Cornell than inside of a beautifully constructed architect?” Jurgazzle Tamleria, the Dean of the ADP School, agreed with the sentiments of the students and was equally excited, saying how “the tradition of Architect Day gets all of our dragons involved in a project that they truly love working on. You should see the look on their face when the last limb of the architect is finally attached. Pure ecstasy.”

Architect Day starts in Puff ’55 Hall, and travels down East Road to be showered with rounds of applause and fiery incineration. In more recent decades, the College of Engineering has built their own architect in response to the dragons, but this architect is often smaller and more like an interior designer when compared to the large and realistic architect of the ADP School.

“The engineers always think that they can build a better architect, but they don’t know the half of it. In fact, we know that our architect will be better then theirs, and after we have defeated them, we’re gonna celebrate,” said Mushu Shinagoya, ’14. Reports indicate that non-dragon students still have no idea what goes on at a dragy party, but hear that they get pretty crazy.