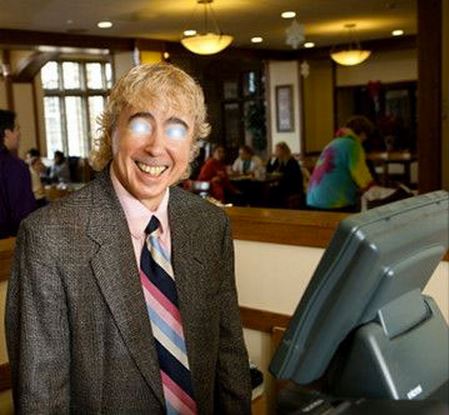 Cornell Dining announced earlier today that Okenshields greeter David Sepulveda, commonly known as “Happy Dave,” has elevated into a higher level of being. Having been happy for so long, he has developed an understanding of the universe incomprehensible to other humans. As a result, he has transformed into a creature of the higher dimensions.

“Dave was doing his usual job, swiping Cornell ID’s and occasionally knocking on his counter, but this time he started smiling especially widely,” said Alan Dedrick, manager of Willard Straight Dining and common mortal. “His eyes bulged out and his face started to emit light. He actually levitated off the ground and started chanting in a language unknown to the tongues of modern man.”

Students have long wondered what keeps the blonde Jheri curled employee so happy and it has only now become clear that he has been contemplating the meaning of life since he started his work.

“His comprehension of the human condition was apparently too great,” continued Dedrick.

Witnesses say that during Dave’s existential epiphany, several students were able to enter Okenshields without using a meal swipe.