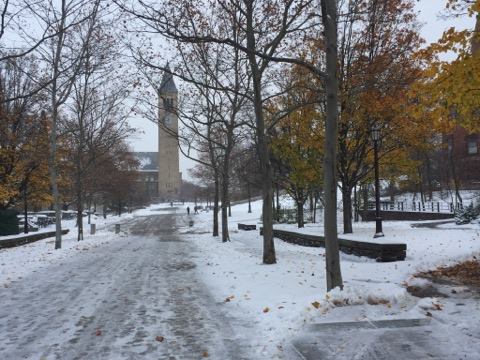 ARTS QUAD – Following a relatively surprising November snowstorm, reports indicate that Cornell students are using the change in weather as a conversation topic in place of much more controversial issues dominating discussions for the past month.

“Brrr, it already feels like winter [and boy am I glad that I have something else to talk about besides minimum versus living wages, the various violent crimes that have recently taken place in Ithaca, tuition hikes, the lack of women in STEM fields, or the pipeline protests in North Dakota]. And it’s not even Thanksgiving yet!”

After fully exhausting various undebatable talking points about snow, Palmer resorted to asking her friends about their Thanksgiving break plans before inevitably reminding them that eating turkey was unethical.