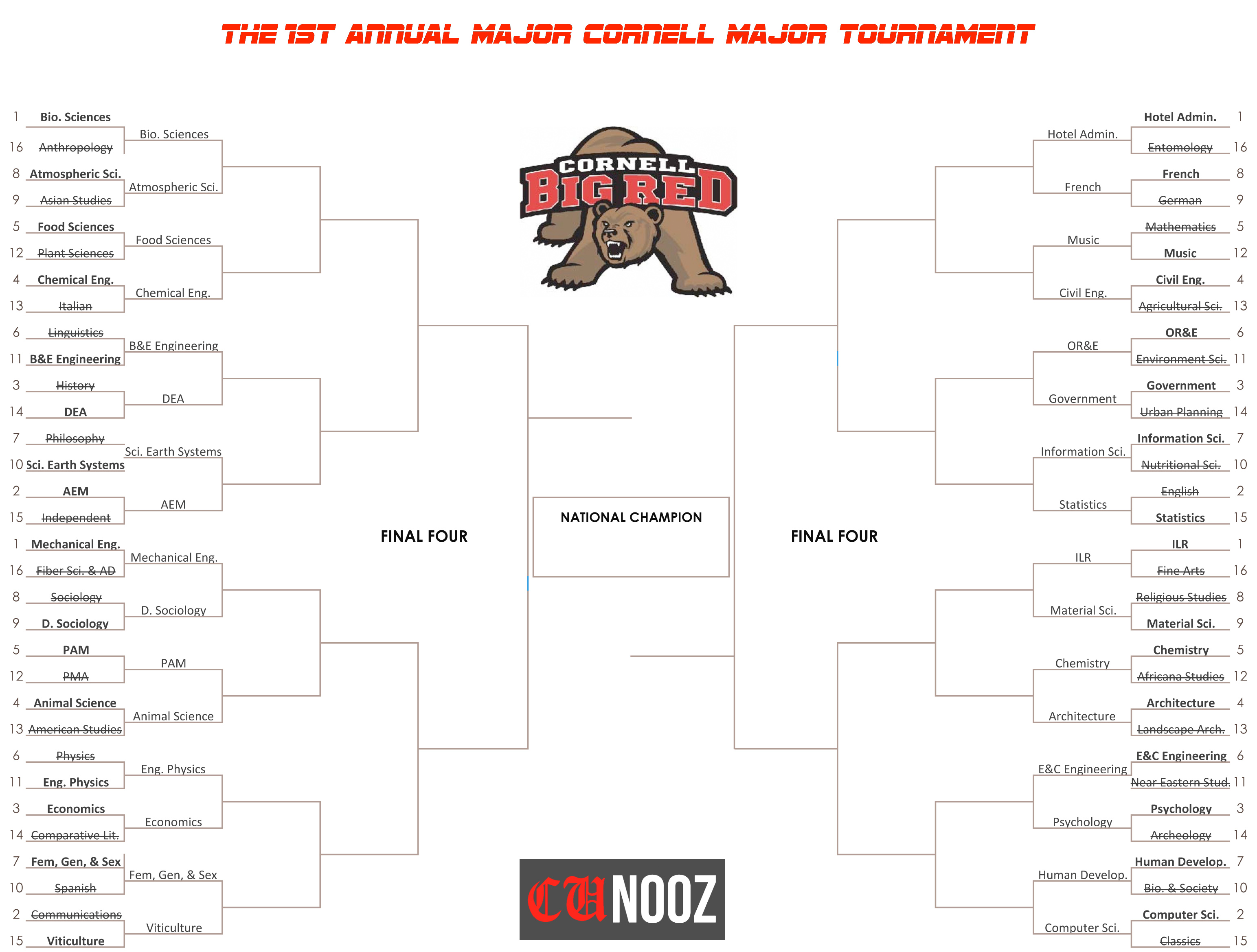 CU Nooz is proud to announce the 1st Annual Major Cornell Major Tournament! We’re down to 32 undergraduate majors battling it out to determine once and for all which major is the most likely to get votes in an arbitrary competition. Look over the bracket, read up on what each major is, and vote for who you’d like to see move on to the next round! Round 2 voting ends this Tuesday. After Tuesday, the Round 2 winners will be announced, and voting for the next round will open up. In the end, the last major standing will receive a wonderful prize in the form of three feature CU Nooz articles. Happy fighting!

Round II voting has closed. Here are the results! Winners are bolded.

BIOG (1) vs. Atmospheric Science (8)
Biological Sciences: If you get injured, these students will be the first to rip out the pages of their Orgo textbook to bandage your wound.
Atmospheric Science: For those who want to learn how to stop climate change and see the planet get destroyed by climate inaction anyway.

FDSC (5) vs. CHEME (4)
Food Sciences: Helps students form a convincing argument that Okenshields isn’t really that bad.
Chemical Engineering: It takes four long years to graduate, but only two to become accepting of the oil industry.

MECHE (1) vs. DSOC (9)
Mechanical Engineering: Really enjoy handling greasy nuts.
Development Sociology: The study of why you didn’t have friends in middle school.

PAM (5) vs. ANSCI (4)
Policy Analysis and Management: So there are definitely aspects of economics, but not really… and there’s a stats class that everybody takes, but the major isn’t really math-based… honestly we have no clue what these people do.
Animal Science: Daily number of classes interrupted by pictures of cute puppies: 3

FGSS (7) vs. VIEN (15)
Feminist, Gender, and Sexuality Studies: Making the one male student in the class uncomfortable since 1969.
Viticulture and Enology: Spend four years studying the intricacies of different wines, but still be willing to drink Franzia at frats.

MUSIC (4) vs. CEE (12)
Civil Engineering: The most polite of the engineers.
Music: Prepares you for a rewarding career as a street bassoonist.

ORIE (6) vs. GOVT (3)
Operations Research and Engineering: Hey do you know Dave? Our friend Dave is in ORIE.
Government: “I knew Trump was going to be elected.”

CHEM (5) vs. ARCH (4)
Chemistry: Most of these students have read the periodic table cover to cover.
Architecture: Hey, are they ever going to fix that hole in Rand Hall?

ECE (6) vs. PSYCH (3)
Electrical and Computer Engineering: The friend you call when you drop your phone in the toilet.
Psychology: The only major where your professor studies you.