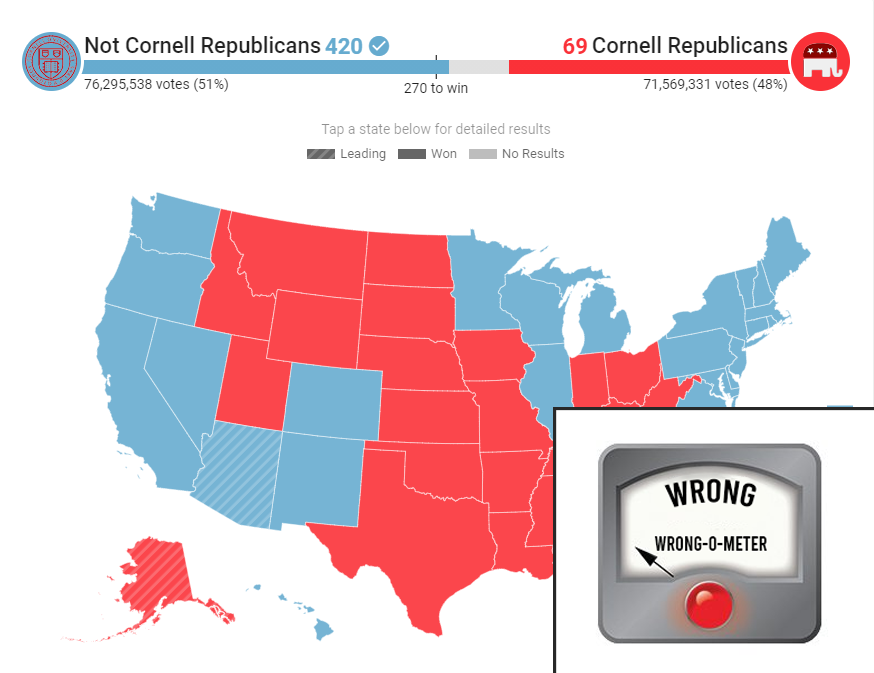 MCGRAW HALL—Following major news outlets’ calls projecting Joe Biden’s victory in the 2020 Presidential Election, Cornell Republicans’ endorsement of Donald Trump in the 2020 election has been proven wrong. This complete and total whiff comes on the heels of their 2016 endorsement of Gary Johnson, making them 0 for 4 over the past 16 years.

“We thought Gary Johnson really had a shot back in 2016 and were certain he would win a state or two,” said Cornell Republicans President William Hatchfeld ‘21. “After witnessing almost four years of authoritarianism, unrepresentative judiciary appointments, a botched coronavirus pandemic response, a recession, and Donald Trump’s general malfeasance and incompetence, we thought he was well on the way to a landslide reelection.”

In addition to being wrong about the past four presidential elections, Cornell Republicans have also committed to being wrong about nearly every single other issue including but not limited to women, people of color, LGBTQ+ rights, immigration, policing, science, and economics.

“In the true conservative spirit, we are vehemently opposed to any necessary change whatsoever,” said Hatchfeld. “Which is exactly why we’ve thrown our full support behind policies such as trickle-down economics despite overwhelming evidence that they don’t work.”

As of press time, election statisticians have decided to start using any future endorsements from the Cornell Republicans to determine who will be losing their respective election.