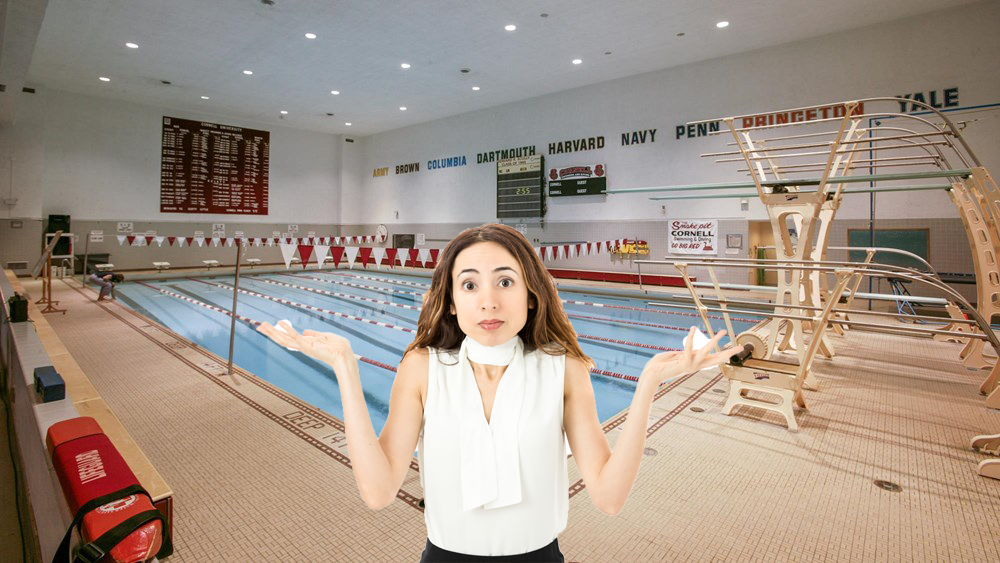 NEW YORK CITY–Last Monday, Shelby Lawrence ‘21 began her first day at her entry-level job as a Coffee Gofer at Morgan Stanley and was met with an unwelcome surprise: without having completed Cornell’s mandatory swim test due to COVID-19 cancellations, she was completely in over her head!

“At first I thought it was the two years of virtual Econ that was making me nervous about my upcoming position at Morgan Stanley, but now I know it’s that I never got to put my freestyle to the test.” Lawrence explained. “How can I know if I’ll sink or swim in the real world without surviving three laps in Teagle?”

On that fateful first day, Lawrence accidentally brought back a mocha latte instead of a cappuccino. Later that afternoon, she felt flooded by the inundation of orientation materials, and stood gasping for air while trying to manage the Xerox machine. Lawrence even cried herself to sleep that night, remembering her pathetic attempt to doggy-paddle down Wall Street in the pouring rain.

“I guess I should have expected the steep learning curve I would experience at work due to my lack of swim experience. Whenever I talk to alumni, they always cite the swim test as a seminal part of their post-grad confidence and success,” Lawrence said. “Sure, the degree’s alright, but we all know that the real Cornell advantage comes from the assessment of our buoyancy.”

The Office of Alumni Affairs and Development, having been notified of the widespread concern, floated the idea of a make-up swim test that would occur some time in 2023.