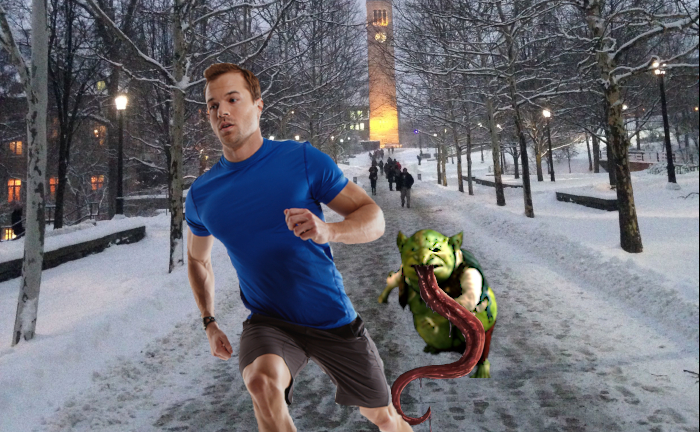 CORNELL HEALTH—Administrators from Cornell Health and Safety introduced a new member of their team this morning: Godfrey the Knee-Licking Goblin.

“We thought it was past time to fight back against the epidemic that is guys wearing 5” inseam shorts in the middle of winter,” announced Arnold Riggs, newly appointed director of C.U.P.D. (Cornell University Patellar Division). The task force consists of Riggs and ten “goblin handlers” whose job it is to “keep fatalities to a minimum.” Godfrey himself sports a five-foot-long prehensile tongue and two rows of razor-sharp teeth.

“There are a few kinks that need to be worked out,” Riggs admitted. “Godfrey is a dedicated and caring creature, but once he gets a taste for blood, there is no stopping him.” Riggs went on to describe the process of training the goblin, which involved spreading peanut butter on mannequins’ legs and “only rewarding [Godfrey] when the knees were licked squeaky clean.”

“Anyone wearing pants has no cause for concern,” Riggs said in his closing statements. “We project a 75% decrease in frostbite-related knee injuries this winter. Come summer, Godfrey will be put into cryosleep, where his hunger for knees will grow until he is released again next fall.”

Several students expressed support for the new initiative. “It’s clear they have students’ best interests in mind,” said George Basset ‘23, licking his lips. “Campus will be a better place because of it.”

Basset was later seen on Ho Plaza ripping holes down the front of his pants and asking passersby if they had any spare peanut butter.