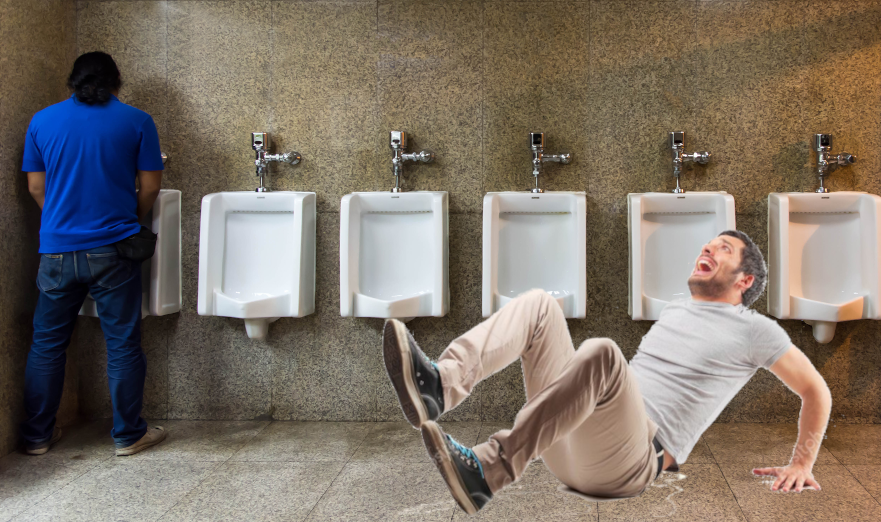 Every day at noon, I begin my arduous trek to the piss palace which I had carefully chosen on the ninth floor of Bradfield Hall, a place so far off the beaten path that no mortal man would dare to venture. See, a man’s experience in the bathroom is a sacred thing; it’s a time of healing, a chance for introspection. The place he chooses for such a task might be even more revealing of a man’s character than the act itself. Here, alone in the desolate halls of a territory I so carefully marked for mine own taking, I was king and my reign was eternal.

That was, until I entered upon my hallowed grounds to find a dissident stationed at the middle of three urinals along the wall. I would not–could not–deign to piss with the common folk, a madman at that, for a king’s gold is for his own viewing. I walked to the empty stall, being mindful not to break into a trot, and slammed the door. With the splashing sound of the man’s strong stream on the ceramic urinal overpowering my senses, I had failed to notice the black trash bag wrapped tightly around what should have been my reprieve. The growing pressure in my groin represented a feeling I had become unaccustomed to: defeat.

Watching from under the stall door, I saw the man’s boots turn and march toward my stall. A yellow envelope fell on the ground and was kicked to me under the door, its paper exterior quickly soaking in the floor’s many offerings. I picked it up and spilled its content–pictures of my friends and family, prescriptions for my incontinence, a copy of my criminal record for indecent exposure, and crudely drawn map.

“You don’t pee here anymore,” the man said in a booming voice before walking through the door without washing his hands.

I stepped out onto Tower Road minutes later with a wet face and a wetter crotch, starting my journey towards West Campus. Waiting for me there, at the bottom of Libe Slope, in the shape of a 4x4x8 blue plastic hovel was my final destination–a piss prison in which to live out my days.