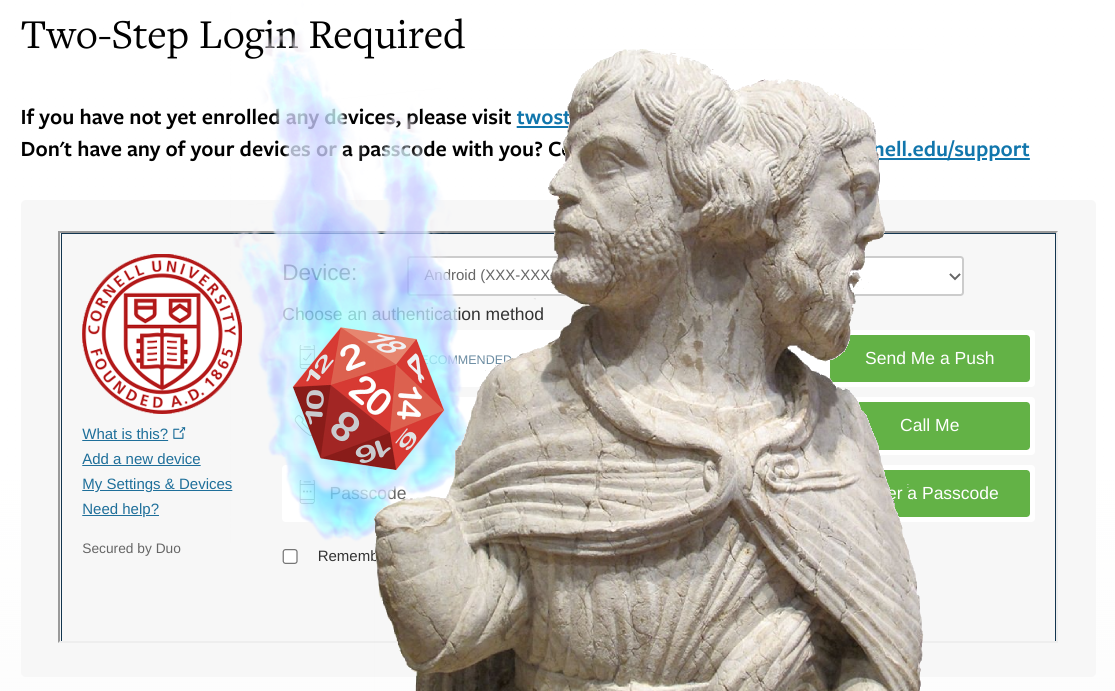 GOLDWIN SMITH—There are many downsides to being mowed down by a bicycle in the middle of Feeney Way, as I discovered at 8 AM today. Sprawled out on the crosswalk, clutching my new sprained wrist to my chest, I could do nothing but holler obscenities at the fleeing cyclist and mourn the loss of my too-expensive mocha latte.

But the worst part of it came only after I had limped away from the scene. I pulled my iPhone 14 from my pocket, ready to dial the police on the speeding scoundrel of the streets, but to my horror, it had been entirely shattered. Even the shitty $10 screen protector was smashed in, and what had once been a beautiful lockscreen of Ryan Lombardi’s perfect visage now showed nothing but glitching black and white lines.

As I stared at my phone, a slow, creeping dread began to come over me. After all, I’d been heading to Olin Library to finally start that 20-page paper due tonight, which meant logging into Canvas to reread the rubric. In a panic, I hauled my computer out of my backpack and attempted to log in, only to be met with the most terrifying sentence I’d ever seen: Two Step Log-In Required. In desperation, I tried to send a push, but the shattered remains of my phone just glitched at me in anger.

Submitting an IT ticket wouldn’t get me a response until next semester, and my professor would only leave me on read. I had no other choice—I had to track down Janus, ancient Roman god of doorways, endings, and two-factor verification.

My shoes squeaked loudly as I strode through the hallowed halls of Goldwin Smith, studying each weird statue and artifact for any clues as to the god’s location. I learned quite a bit about ancient Egyptian pottery techniques and sex toys, and felt more secure than ever in my decision to not major in history, but there was no sign of the wily god anywhere. Perhaps he made his home in Klarman Hall instead, with the Greeks? I made my way to the more modern half of the building and poked around the statues for a few minutes, but found nothing there.

Dejected, I leaned against the Temple of Zeus doors, wondering where else I could search. Time was running low; if I couldn’t find him soon, I might as well just drop out now.

Standing there, my vision began to blur. Was I crying? I lifted a hand to my face to check, but before I could process anything the world spun sharply around me. Temple of Zeus faded away, and when I blinked, an old and weathered marble statue stood before me instead, with two faces on either side of its head, staring in opposite directions. It was maybe the ugliest thing I’d ever seen, second only to the crimes against nature in my dorm bathroom. In the distance, I could hear the sound of rain.

Of course! It was so obvious now. Where better for the god of doorways than the bizarre liminal space between Klarman and GSH? One foot in the Roman empire, the other in a weirdly-shaped glass box.

With a sudden, resounding clap of thunder, the statue’s eyes flashed open, and Janus cried out with his two mouths, “Show yourself, challenger!”

Summoning all of my courage, I stepped forward and brandished my sprained wrist like a sword. “I am a student of Cornell,” I declared as loudly as I could. “And my phone is busted as shit. I’m here to duel you for Duo Mobile!”

A loud cackle echoed through the room. “Foolish mortal,” Janus gloated, “duels are so very 18th century. Don’t you know all the cool gods play Dungeons and Dragons now?” Moving slowly, as statues do, the god raised one hand and snapped his fingers. A D20 appeared in midair, clattering down to the tiles at my feet.

“Do you… want to play D&D?” I asked, checking my watch nervously. With only 8 hours until the deadline, I would barely have time to draw up a character sheet, let alone engage Janus in pen-and-paper combat.

“Don’t be ridiculous,” the god scoffed. “Do I look like I have all day?” He looked like he hadn’t moved in a few centuries, but I wisely kept my mouth shut. “We’ll keep it simple. If you roll 2, I’ll grant you your access to Canvas.”

“Roll 2?” I picked up the D20 and counted up the sides; if my calculations were correct, there were 20 of them. “I… I only have a five percent chance of doing that! This isn’t fair!”

“You should have thought of that before you got hit by a bike!” he jeered. “Now roll, and accept the ending you earn!”

I fumed in silence—it wasn’t my fault I had forgotten to look both ways, now was it? I had been counting on an easy victory against Janus, but mathematical odds were never in my favor, evidenced by the downright terrible prelim score I’d gotten last week. I couldn’t win this game.

But perhaps… perhaps I could trick him. Janus wasn’t the only one who’d gotten into D&D recently. Digging around in my backpack, I retrieved my prize: another D20, this one neon green. Triumphantly, I tossed both dice to the ground.

“Not so fast!” I challenged. “You said if I rolled 2, I would win. And I did! I rolled two dice! Now give me my Canvas access!”

Both of his jaws dropped, and his eyes burned with rage. “Fine, you wily, cheating trickster,” he spat out. “The passcode is 2222222. It shall grant you one entrance into the realm of Canvas. Now get out of my sight!”

Giddy with victory, I didn’t argue, instead grabbing my backpack and hightailing it through the doors. The world shifted around me once more, and I burst out of Goldwin Smith Hall into the bright and chilly morning, sprinting my way across the Arts Quad as fast as I could.

With a newly purchased mocha latte and a croissant for my troubles, I settled into Libe Cafe, opening my laptop and punching in the code I’d fought so hard for. Canvas opened up immediately, and with a cheer that earned me several dirty looks, I scrolled past every overdue assignment to eagerly click on my paper.

My computer buffered for a moment, the loading screen symbol spinning away, and to my annoyance, it brought me right back to the log-in page. With a heavy sigh, I typed in the numbers once again and hit Enter.

Your passcode no longer works in this mortal realm, the screen told me cheerfully.

When I realized what had happened, I couldn’t help myself—I let out a terrible cry, falling to my knees and beginning to weep. All of my searching, all of the danger, all of it for naught! As the Olin librarians forcefully escorted me from the building, I cursed myself for making such a horrible, amateur mistake.

I had tried my best, but Janus had gotten the last laugh in the end: of course a cheater won’t be remembered for 24 hours.