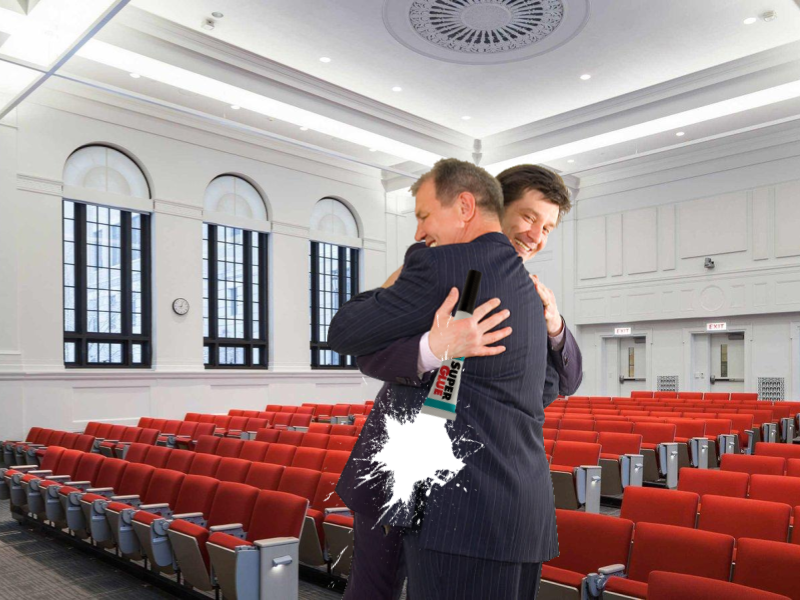 WARREN HALL—After attending a seminar on “sticking around in the business world” at a networking event, Dyson freshman Cooper Waldingham promptly Super Glued himself to the nearest important-looking person he could find and broke into an ill-rehearsed and pun-laden elevator pitch.

“I guess we’re stuck with each other now, huh?” said a winking Waldingham to the bewildered executive. “Now that we’ve connected, shall we discuss career opportunities? My high school teachers loved me for my stick-to-itiveness, and my basketball coach said I was the glue guy on our bench. I’d love to cement an internship at your company sometime soon.”

Waldingham continued to pitch himself to financial analyst Hannah Nash as she struggled to free herself from the overzealous student and throughout an extensive adhesive removal process overseen by a small army of EMTs. Despite Waldingham’s confidence, he did not seem to have swayed his captive.

“I’m a veteran of the college circuit, so I’m quite used to depravity from business students,” said Nash. “But when this little shit [Waldingham] reached out for a handshake, I never could have expected he had decided to turn himself into flypaper. God, I hate business majors.”

At press time, Waldingham was stuck to a chair.