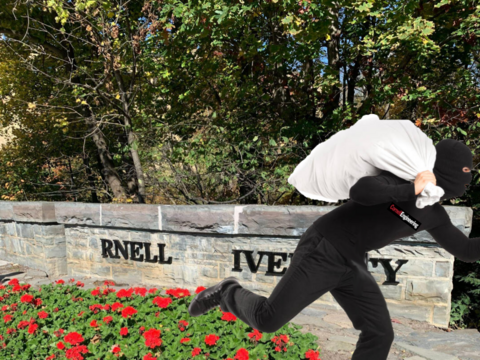 HOLLISTER HALL—Last Wednesday, CUPD discovered the letters stolen from the Cornell University sign on the third floor of Hollister Hall after being tipped off by an anonymous Engineering student who was distressed by the strange geometric symbols.

“We figured literacy would be a good industry skill to work on before the upperclassmen join the workforce,” explained Professor Eric Fischer, who leads the extracurricular reading seminar that has garnered much attention among the College of Engineering Class of ‘23. “The students are eager to learn. I tried to start with books, but they kept calculating their torque. Starting with letters seems to be working well. I’m hoping to start sounding out words soon!”

Hurrahs of “zero” and “o” could be heard from inside the aptly-named “Word-Makers Space” as the students practiced differentiating numbers and letters. “We recently started our vowel investigation,” continued Professor Fischer, “and we’re finally clear that ‘i’ is, in fact, not an imaginary letter. Unfortunately, there is no ‘A’ in ‘Cornell University’ … That’s been a serious issue actually. I tried building a makeshift one by turning the ‘V’ upside down and tapping some string between the two legs, but they thought I was raising the string to the ‘E I O U and sometimes Y’ power. What was even more surprising were the attempted solutions that came from it.”

The two credit seminar assigns weekly p-sets submitted via Canvas, allowing for quick and thorough feedback on topics that students are struggling with. Professor Fischer has added a mandatory weekly discussion section where he reads the feedback aloud to the pupils as they’re gathered on the rug.

“I never understood why the stone slab had a union symbol on it,” explained Jessica Freehold ‘23 while reflecting on her experience in the seminar thus far. “When Professor Fischer explained that it is actually a ‘U’, everything made sense. All of my friends and I are Cornell students, but in my four years here I still haven’t met a single Niverity student. Are they like… by the Ag Quad?”

CUPD has decided not to take legal action regarding the theft on the grounds that the letters are being used for interdisciplinary enrichment. They are currently investigating a possible relation to the disappearance of library books from local elementary schools.