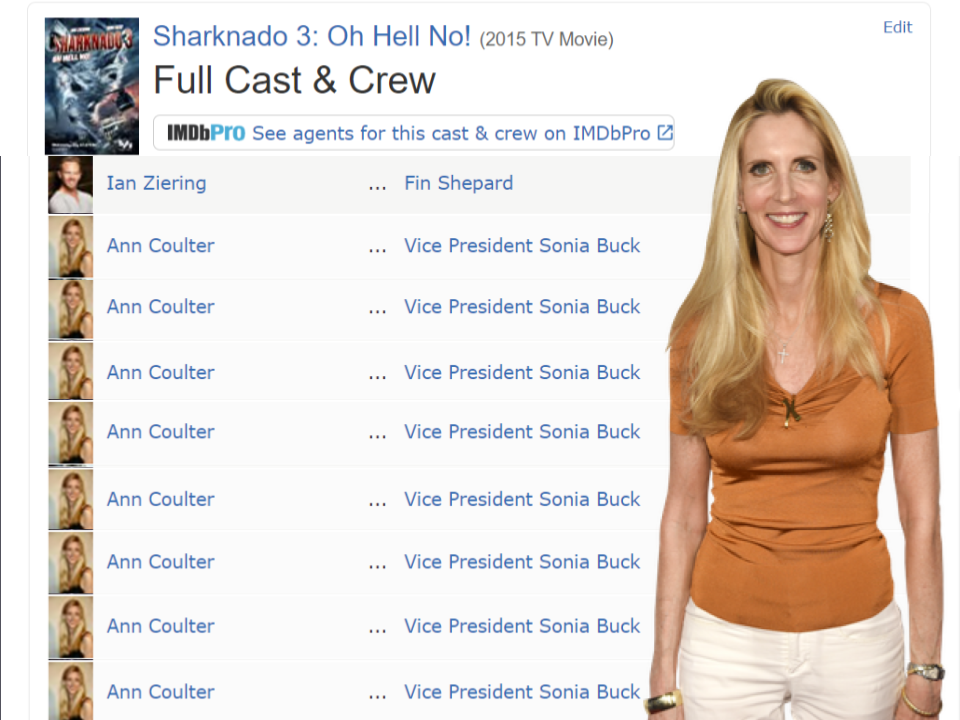 MYRON TAYLOR HALL—While most would be thrilled to have such dedicated fans following their career, controversial political pundit Ann Coulter was reportedly “extremely disappointed” that the crowd at her appearance on Wednesday consisted primarily of Sharknado 3: Oh Hell No! enthusiasts.

“The midterm elections just happened,” the actress, renowned for her Oscar-worthy and emotional performance as United States Vice President Sonia Buck, could be heard venting over the phone to her associates at Fox News. “I was all prepared to spew some random MadLibs about abortion wrongs and the Canadian border. I even wore my best Kanye West shirt! But all these liberal losers wanna talk about is the dumb shark movie.”

Fans were taken aback and disappointed in Coulter’s lack of love for her greatest accomplishment. “It’s understandable that she wants to move onto other projects,” sighed a teary-eyed Teagan Jones, treasurer of the longstanding Cornell Sharknado Fan Club. “But I just wish she would spare us at least a few crumbs of behind-the-scenes gossip. She didn’t even sign my Blu-Ray of the spinoff film Lavalantula.”

Others, however, were less surprised. “I thought it was pretty clear that Coulter cut ties with the franchise in 2017,” said Rudy Reid ’25, referring to the release of the penultimate film Sharknado 5: Global Swarming. “They really went ham on the environmental soapbox, and the ‘nado was just a thinly veiled expy for Trump and the downfall of America. Also, the dimensional vortex artifact found under Stonehenge is such a cheap retcon of the Sharknado origin story set out by the initial trilogy. I wouldn’t want to be associated with such garbage writing, either.”

When asked her opinion on Mark Cuban’s potential presidential candidacy in the wake of his performance as President Marcus Robbins, Coulter nailed her audition for the next film’s sharknado by screaming at the top of her lungs and hurling a chair across the stage.