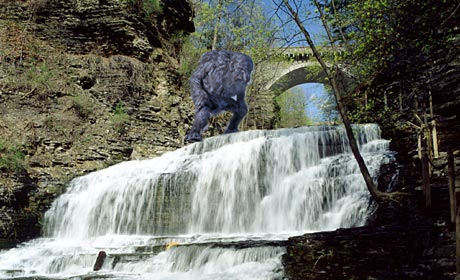 The Cornell Administration has installed a wily bridge troll at the intersection of College and Oak Avenue in an effort to stave off Underclassmen looking to engage in illegal alcohol consumption. CU Nooz spoke to Student Health representative Michelle Kellers who explained: “We really needed a way to prevent students from crossing the bridge into collegetown, and when we found Grunkk [a magical troll] hiding out under Mann Library, we knew we had a viable solution”

Kellers explained that the troll would ask students three questions, at least one in the form of a riddle. Although the questions will vary by student, the troll will ask each and every student whether they are, in fact, 21.”

Keller explained that although ingenious, the plan was not foolproof, stating, “We recognize, that some students could simply lie, outwitting the bumbling troll, but that most freshman possess neither the cunning nor the courage to outsmart Grunkk”.