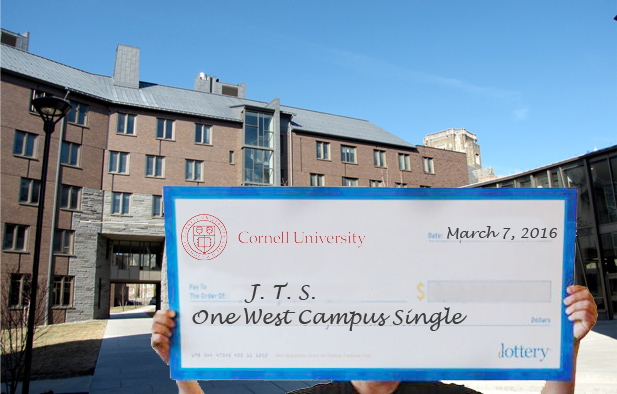 DONLON HALL — The lucky winner of a coveted 5 PM time slot and a single in Bethe Hall during the housing lottery for the upcoming fall semester does not want to be the subject of mass media frenzy or be in the public eye whatsoever, and has elected to collect her winnings but remain anonymous.

“I knew that I’d been blessed and that my life would change forever for the better when I first got my time slot, but I’d, at the same time, like to keep my anonymity. I just think my life would be way easier. I just don’t want anyone to think that I’m special or be put on a pedestal. I just got lucky,” said the freshman at a press conference with a bag over her head, whose relationships with her close friends had already been affected by her receipt of the favorable time slot.

Cornell is one of a handful of universities that allow housing lottery winners to remain anonymous. Many people would kill to get the spacious West Campus room that was up for grabs, and the option of not having ones name out in the public eye is guaranteed to keep students safer.

Critics have maintained that allowing winners to keep their winning slots but remain anonymous interferes with the transparency of the randomized process, a necessary component to communicate the idea that housing selection is fair for all students.

The majority of students who were not so lucky with housing will have to wait and try their luck scrambling for apartments in Collegetown during the Ithaca Renting free-for-all next October.