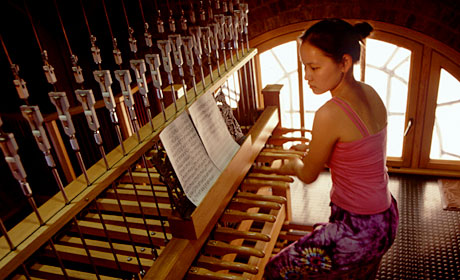 Due to nonessential labor and upkeep costs, Cornell’s famous chimes have been removed from the clock tower. President Skorton refuses to let the campus go without music, however, telling CUNooz: “I asked my 16-year-old nephew Colin if he had anything to play music on. He said I could use his old ‘amp’, as he just bought a new one for his band with his birthday money.”

Skorton’s secretary, Allie Goldstein, has been assigned the task of compiling a playlist of acceptable music. When questioned, Goldstein promised that the music on deck for play will not deviate from the tunes the Cornell community has grown to love: “I have a couple different bell noises from Youtube to play on the hour. Of course, the main focus has been on getting pop songs from 6 months ago and royalty-free Christmas songs.”

Skorton advises students and faculty to keep an ear out for the change later this week.