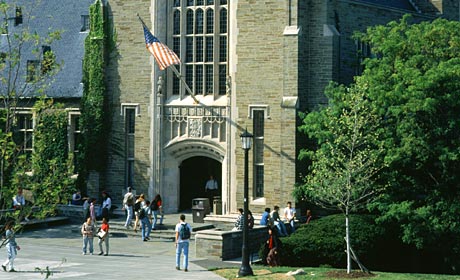 ITHACA-While visiting campus earlier this week, 18-year-old Jacob Goldstein was confident that his Early Decision application to Cornell would be accepted. However, despite his self-assurance and newly acquired standing as an adult, the Scarsdale High School senior simply could not restrain himself from chuckling when his tour guide welcomed the group to “Ho Plaza”.

“I couldn’t believe it” stated a very disappointed Mr. Goldstein, a reputable dentist in the Scarsdale area. “We thought we raised Jacob better than this,” he added as he comforted his wife, Barbara. According to witnesses, the entire group laughed when the news of Goldstein’s outburst spread, leading to the further embarrassment of the Goldstein family.

When asked for an explanation, Goldstein responded: “I really just had never heard the name of the place said out loud before. See, a ‘ho’ is usually a female with presumably loose morals.” It was immediately explained to Goldstein that everyone got the joke, just no one thought it was funny, and the family promptly departed towards the Statler Hotel.