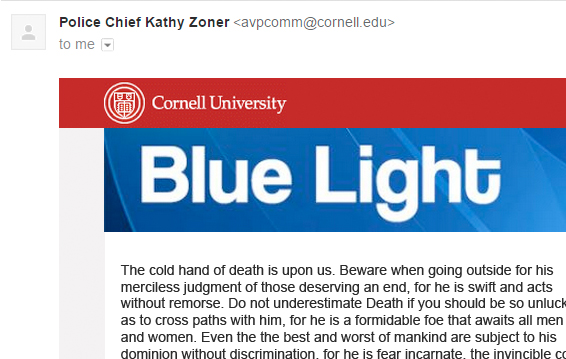 CORNELL POLICE STATION — This past Sunday, Cornell Police Chief Kathy Zoner sent out a campus-wide email warning both students and faculty of Cornell of the inevitable end that is in store for all mortals.

In the communique entitled “Time Waits For No One, Death Always Awaits as the Eternal Doorman, Phishing Alert,” Zoner warned students that no precautions were necessary to prepare for the dark abyss, as “[Death] is both indiscriminate and comes when it comes, never early, never late, but always unannounced. Rude, much?”

Zoner has further requested students to not report any suspicious activity regarding the embodiment of Death as the “unassailable march of time and its ultimate consequence has already been written into the threads of [our] lives. Well folks, there ain’t nothin’ you can do about it!”

“The perp,” says Zoner, “in his personified incarnations, has been described as wearing a long, black robe, and having pale, bony hands.” She continued, “The assailant has also been seen carrying around a giant scythe used for culling those whose time has finally come. He is also about 6′ 3.”

In a following email entitled “Don’t Be Blue But…,” Zoner announced that the Blue Light Service is not able to protect you from the grief you will cause your family.