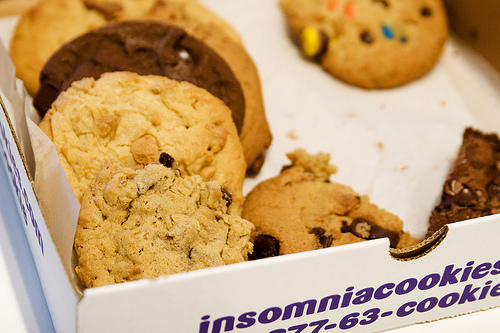 COLLEGETOWN — It was learned today that favorite local late-night dessert establishment Insomnia Cookies will be closing in the upcoming months, and will eventually be replaced by a new business called Paranoia Undercooked Meats.

“We here at Paranoia Undercooked Meats understand that Insomnia Cookies has been a staple among hungry students looking for a late-night snack, and want to assure everybody that P.U.M. will be open during the same hours to provide students with their daily dose of mostly raw beef and poultry,” said Paranoia owner Dominick Calhoun, while sampling some of their famous extra-rare cheeseburgers. “I’ll be honest, it feels like there comes a point every night when a college student will eat just about anything. So why not make a slightly irrational choice by ordering some of our finger-licking ribs, smoked for twelve minutes to make them only a little warm. Or get a taste of our best seller, Dom’s Classic Chicken Wings, taken straight from the chicken and literally put right on your plate, slimey feathers and all.”

Test consumers of Paranoia Undercooked Meats were reported as claiming that while the food wasn’t exactly good, it was “still better than whatever is in those corn dogs at Okenshields.”