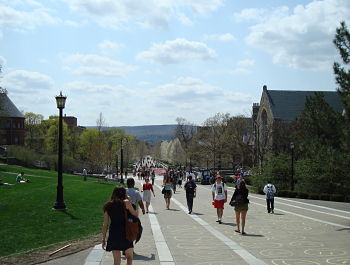 EAST AVENUE – A huge traffic jam developed yesterday after four freshmen began to walk side by side down the side walk, eventually resulting in a dramatic collision of several pedestrians and a cyclist.

“It was carnage,” one bystander reported, “the entire street slowed down, and the next thing I knew there were bodies everywhere.” The jam began shortly before 11:15, with people hurriedly attempting to make it to class on time. The slowdown started at the bus stop on East Ave, and turned to sheer mayhem as a helpless cyclist slammed into the stopped crowd.

A victim of the crash was quoted on-scene as saying, “it was a death trap. We were all boxed in. If only we’d had the room to maneuver.”

The four freshmen reportedly remained blissfully ignorant of the situation, and were later seen completely blocking the entrance to Olin library while conversing.