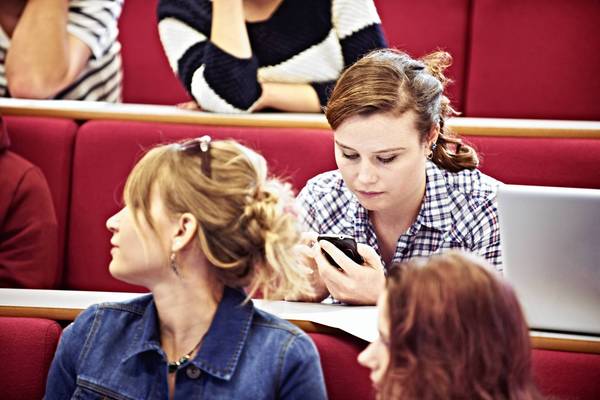 BAILEY HALL – Approximately fifteen minutes into her 10:10 AM lecture for Intro to Marketing, Haley O’Quinn ‘19 had literally no idea what her professor was saying after she started texting during class.

“Since I was in my first morning class and hadn’t had the chance to check my phone yet, I went through my texts, then I checked my email,” said O’Quinn, who has tried but just cannot understand anything the professor is saying when she’s looking at Twitter.

After the class had moved on to step four of the five step process of the business chain, O’Quinn confirmed she had literally no idea what was going on. Failing to learn what a “vertical” is, the avid social media user bowed her head back to her Instagram feed.

“Even when our Professor said that we should remember the next few slides because they’ll be on the prelim, Haley just kept snapchatting pictures of her shoes” said Jacob Flores, an attentive classmate who nudged and whispered at his friend to pay attention when she missed what the essay question is going to be, but did manage to look at all of Veronica’s profile pictures from the past year.

After realizing this lecture was a lost cause and she could copy her friend’s notes, O’Quinn went on to google what was for lunch today in the dining hall.