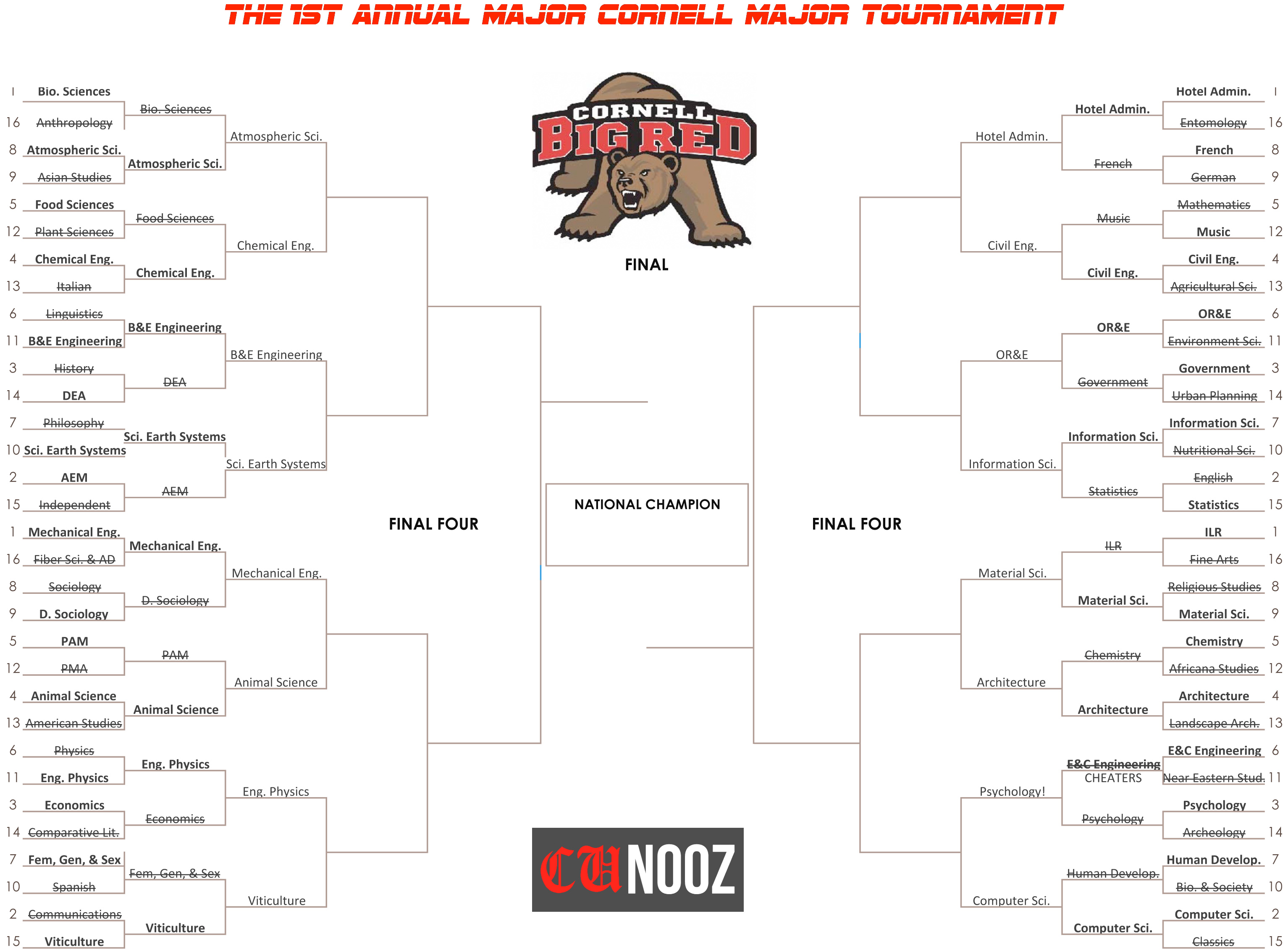 CU Nooz is proud to announce the 1st Annual Major Cornell Major Tournament! We’re down to 16 undergraduate majors battling it out to determine once and for all which major is the most likely to get votes in an arbitrary competition. Look over the bracket, read up on what each major is, and vote for who you’d like to see move on to the next round! Round 3 voting ends this Thursday. After Thursday, the Round 3 winners will be announced, and voting for the next round will open up. In the end, the last major standing will receive a wonderful prize in the form of three feature CU Nooz articles. Happy fighting!

Round III voting has closed. Here are the results! Winners are bolded.

Atmospheric Science (8) vs. CHEME (4)
Atmospheric Science: Number of undergraduates: 12. Number of future weathermen and weatherwomen: 12. Average number of clouds in Facebook profile picture: 4.
Chemical Engineering: Rate of emotional breakdowns: A steady state of 2 per week. Times people have asked if you know how to make a bomb: At least 4. Time available to take liberal studies classes: Good one.

AEP (11) vs. VIEN (15)
Engineering Physics: Number of brain cells: More than you. Number of lasers: 18. Number of nanorobots: Don’t know, we lost them.
Viticulture and Enology: Number of times you’ve explained that you’re not a sommelier: 239. Number of grapes sacrificed for one undergraduate degree: 8 million. Number of quality Rieslings you might expect to find from Central Otago, New Zealand: None, you peasant.

HADM (1) vs. CEE (4)
Hotel Administration: Number of on-campus hotels per hotelie: 0.00104. Average personality: Overly friendly. Number of restaurant recommendations in Ithaca: 9.
Civil Engineering: Number of posters featuring drainpipes: 5. Percentage of students focusing on earthquake-resistant infrastructure: 15%. Percentage of students who realize the San Andreas Fault is about to fuck some shit up: 100%.

ORIE (6) vs. INFO (7)
Operations Research and Engineering: Daily utterances of the word “optimization”: 17. Reasons to be required to take electromagnetism when it doesn’t apply to your career path at all: 0. Frequency of having to tell the other engineers that you’re real engineers, too: All too frequent
Information Science: Number of Cornell colleges offering major: 3. Number of Cornell colleges offering major and tuition discount for New York residents: 1. Reason you picked CALS: $17,370.

CS (2) vs. PSYCH (3)
Computer Science: Number of times you’ve explained that posting a funny picture on someone’s Facebook wall after they forgot to sign out isn’t “hacking”: 306. Number of passwords related to Star Wars: 721. Number of binary jokes that are funny: 10110.
Psychology: Most common love interest: their mother. Number of brains per psych student: 1.03. Number of psych majors who know how to hack this poll: hopefully 0.