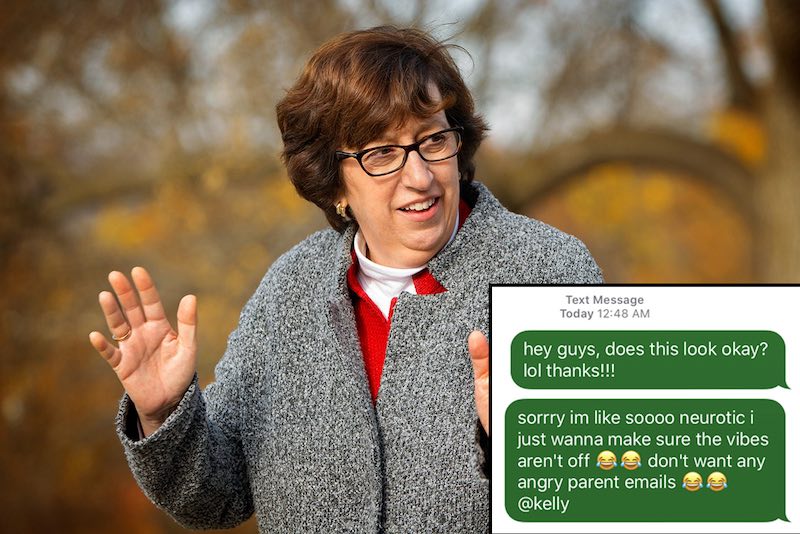 DAY HALL—Cornell University President and former linguistics major Martha Pollack hit up the groupchat composed of Cornell’s most high-profile administrators to check her spelling on the latest solemn missive to the campus community and “make sure the vibes aren’t off.”

“It was like 1am, and all of a sudden I get this notification. It’s a snippet of her draft email in Outlook 365. And it’s like, dude, you were supposed to have sent this out this afternoon! But I did her a solid and responded with a heart reaction and pointed out she used “Cornellians” three times in one paragraph,” said Joel Malina, Vice President for University Relations.

“I just dropped a compliment when I woke up and saw the message in the morning,” said Madelyn Wessel, who occupies the role of both University Counsel and Pollack’s #1 hype woman. “Thirty thousand plus people are going to receive the email, and at least a thousand of them are going to actually read it; mostly the nerds. That’s a lot of pressure. One misplaced word will be the subject of Guest Room articles and Letters to the Editor for the next month.”

“It came in all weird and pixelated on my phone,” explained Ryan Lombardi, Vice President for Student and Campus Life. “Maybe it’s because I have an Android? I said ‘looks good,’ but honestly, I didn’t read it. I have my own campus-wide email to work on!”

When asked for comment, the Office of the University President clarified that President Pollack receiving proofreading help from her colleagues is in no way a violation of the academic integrity policy, “unlike the obvious outfit copying that Madelyn has been engaging in.”