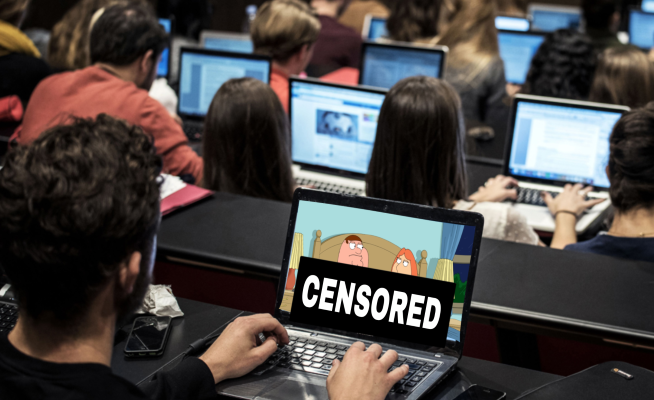 Now I’m not one to get up on a high horse and piously judge the actions or interests of others, but some things really bother me. When something is deliberately rude, I can’t help but notice it and take it a little personally. Take, for example, what happened last week during my film class. It’s a pretty lovely class, spent watching movies and discussing the social implications of the themes in the films, which is usually a highlight of my week. I sit alone in the very last row of desks and I quietly mind my own business, taking in the art and trying to appreciate the analysis that my professor provides. It wasn’t until last week that the quiet, calm environment of the class was upended by the student sitting in front of me.

Like myself, this anonymous student sits alone in his row, albeit three seats to my right. He has never distracted me, let alone raised his hand to join discussions in class. He does not make any noise and sits in the same seat every class. But last week everything changed. While our class was enjoying Stanley Kubrick’s Dr. Strangelove Or: How I Learned To Stop Worrying And Love The Bomb,  a classic entry in American cinema, I was distracted by this student’s laptop screen. Juxtaposed to the black and white film that our class was watching on the projector, his screen was brightly lit, rainbow-colored, and was visible only to him and myself. Drawn away from the film at hand, I glanced at his screen and that’s when I saw it: fucking Family Guy porn.

If watching incredibly graphic animated pornography starring beloved cartoon characters in public wasn’t bad enough, this monster took things two steps further: he not only distracted me in class (which I don’t really give a shit about), but he didn’t even have the basic decency to put the subtitles on. I mean if you’re going to distract me with Quagmire banging the dog, I at least deserve to know enough about the plot to know how they got there.