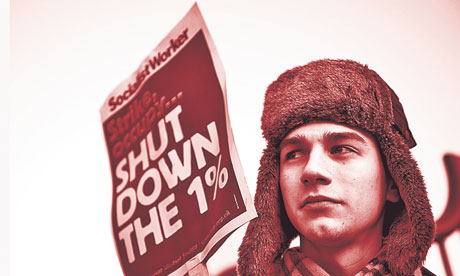 As the new semester begins, so too does the never-ending plight of the workers, according to a few Cornell students. Leon Truman ’17, and his classmates in “Marxism: Then and Now” have decided that the sins of capitalism are theirs to overturn.

“The capitalist presence here is really out of control,” said Truman, sporting a pair of brand-new Nike sneakers. “The working classes of Cornell are being marginalized; they just don’t know it yet. We’re here to show them.”

Truman and his cohorts have been trying to shut down Cornell Dining for the “bourgeoisie oppression” of its staff. The group of students have been holding rallies outside of RPCC. Last week they brought in a record crowd of ten supporters, up from its usual six. Truman attributes the rise in numbers to “the empowerment of the working man” and also to “the chocolate bars we gave out.”

When asked what’s next, Truman replied, “I’m not sure. I’m thinking of buying a Che Guevara t-shirt to show my support.” Truman does not have the money needed but intends to work longer shifts at his job in order to purchase his desired shirt.