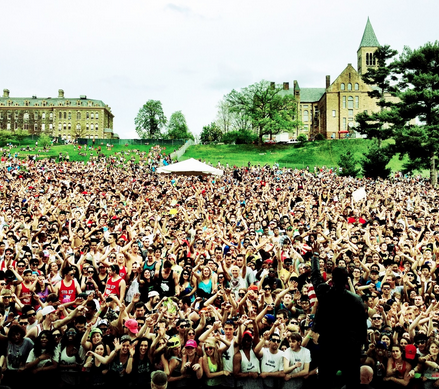 ITHACA, N.Y. – Thousands of Cornell students were disappointed to hear who the new headliner for Slope Day 2014 would be. Although popular in many areas of the country, students have deemed the headliner “sucky,” “fake,” and “a piece of shit.”

When asked about the level of talent in recent Slope Day acts, Drew Livingston ‘15 replied that “it’s all gone downhill since I was a freshman. Why can’t we get more talent like Taio Cruz?” Livingston has admittedly never listened to any of the headliner’s music, and “gives the lowest amount of fucks” about starting.

Twins Brittany and Jessica Silverman ‘16 were not pleased, citing a huge downgrade from Ke$ha. “[The headliner] is too country,” said Jessica. “I hate country.” Brittany cited similar concerns, adding that the headliner is “too poppy” and “too ‘gangsta’” for the average Cornell student. “We just want an act that everyone can appreciate.”

The Slope Day Programming Board responded by saying that “we tried to improve this year. We sent out surveys to get feedback about the artists from last year, but not one person remembers anything from Slope Day. Not one single person.”

CU Nooz staff asked Joe Weir ‘14 to respond to SDPB’s comments, and he said: “No shit. Nobody is supposed to remember the act. That’s not what it’s about. When I was a freshman on Slope Day, I was clutching the toilet for dear life vomiting my brains out. When my friends told me I was on the slope with Nelly earlier, it gave me the strength I needed to rally and copiously drink more alcohol later.”