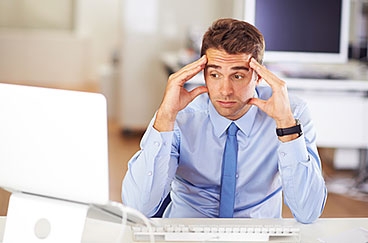 BAKER HALL — Nearly a week after the staff and faculty pre-enrollment period, Assistant Professor Justin Wilson found that he was still on the waitlist to teach General Chemistry for the upcoming spring semester.

“I just kind of hate my life right now,” said Dr. Wilson, continuously hitting the ‘refresh’ button on the InstructorCenter homepage. “I was so ready that morning before pre-enroll started; I woke up super early and had ‘The Final Countdown’ playing on loop, checked the internet connection, made a cup of coffee, and had my class number and everything. I even had a rough syllabus going.”

He further added, “It was going to be awesome, man. Me and a bunch of my TA buddies were going to teach the shit out of that class.”

Despite Wilson’s preparation, the professor was unable to secure the class due to a stroke of negligence.

“The pre-enroll here has like, no chill. I added the class correctly and everything, so I just went to the kitchen to make some more coffee. I come back to my desk and, lo and behold, the teaching staff capacity’s already full. I was like, ‘The fuck?’ My roommate told me a couple days ago I probably just didn’t ‘proceed to step three,’ whatever that means. So yeah, now Dr. Davis’s teaching the class, even though he’s tenured. He doesn’t even need that class.”

When asked why he needed to teach the course, Wilson replied, “Yeah, I need it to teach Organic next year. If I don’t teach Gen. Chem this semester, it kind of screws up all of my plans, not to mention not getting paid my full salary. It’s going to be a pain to explain all this to my advisor friend Pirozhenko when I see her at the faculty meeting.”
Dr. Wilson was last seen sitting in on Dr. Davis’ lecture on molecular chirality, fingers crossed, waiting for him to drop the course after class.