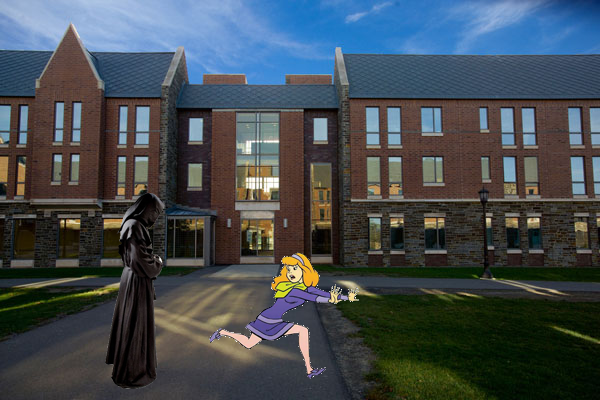 MEWS HALL—Last Saturday, Daphne Smythe ‘25 suddenly awakened in the middle of the night to see a hooded figure holding a chalice filled with a mysterious red liquid loudly chanting Latin hymns outside her dorm room window.

“I know who’s behind this malicious threat!” Smythe declared triumphantly. “It must be that darn Daphne Smithe in my FWS. She’s always answering questions that are posed to me and writing my name on her papers. And last week I caught her cursing my family’s eternal souls after class. This must be the next step in her plan to replace me! Zoinks!”

Smythe has also noticed a physical reaction to her classmate’s nighttime escapades. Her hair has turned a putrid shade of green, her hands have shriveled up like an old witch’s, and her voice has become low and throaty like a frog’s. Smythe attributes these changes to Smithe, who is constantly hovering around Smythe, making annoying small talk and calling her “name buddy”, in addition to placing millenia-old hexes to cripple her body and destroy her will.

Smythe was last seen writhing aggressively on the ground outside Goldwin Smith Hall while Smithe casually leapt over her body, grinning maniacally. As Smythe wailed about, she begged to know the other girl’s sinister motivations for this bewitching trick, but Smithe only replied, “Happy Halloween, folks!”