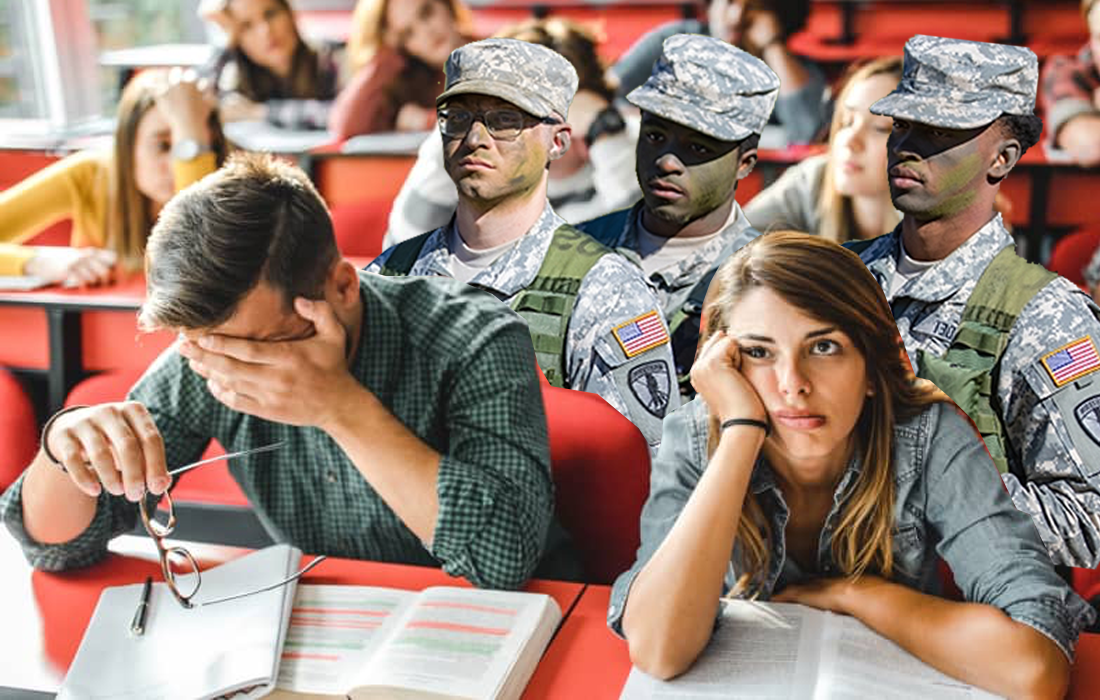 PHILLIPS HALL—Tensions skyrocketed this Tuesday after a third member of the Reserve Officers’ Training Corps forcibly added themselves to the CS1110 Discussion 213 roster. Though a peaceful resolution seemed to be near, the arrival of Cadet Benjamin Peterson ‘25 signals a drastic shift in the ongoing conflict.

“There is absolutely no cause for concern at this time,” stated Cadet Beth Talla ‘24, jotting down the approximate height and weight of each of her fellow classmates on a small notepad. “TA Ryan’s fearmongering about our presence here is entirely unfounded, and the United States Military has no vested interest in the activity of this classroom. While Cadet Peterson’s arrival has been painted by some as a concentration of force to ensure our victory over the rest of you in an eventual conflict, the Reserve Officers’ Training Corps categorically denies these accusations.”

Cadet Talla’s initial enrollment in the class appeared positive, with TA Ryan even going so far as to crack a joke about “needing to watch [his] back.” However, the jokes quickly stopped after Cadet Talla returned the following week with Cadet Allen Engel ‘25 in tow. Talla then reportedly questioned TA Ryan, asking “My back is covered, who has yours?” After a tumultuous semester, the majority of student questions have shifted from the topic of “How do I initialize my for loop?” to “Am I in the middle of a proxy war?”

“One is fine, and two isn’t a good sign, but three has gotta be an invasion,” said TA Ryan Ashe. “This new guy’s not even on the attendance sheet, and the add deadline was weeks ago. He told me he was ‘really interested in computers and stuff’ but the only thing I’ve seen him look at is the size of the windows and the strength of the desks.”

“They might think they’ve got me off guard, but I’ll be ready. This desktop computer weighs about 30 pounds, and I’m ready to launch,” added TA Ryan, a clear signal of his preparedness for the impending war.

The possibility of peace continued to dwindle after another section member was overheard following class, inquiring about where to get a buzz cut and raving about his “sick new Camaro”.