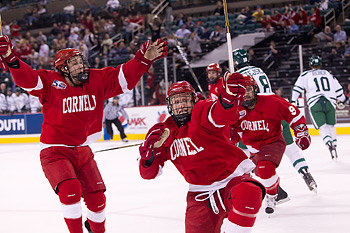 ITHACA- Following his completion of pre-enroll, varsity hockey player Tucker Maclin ’15, announced his excitement at the fact that next semester he will, like all previous semesters, be receiving a 4.0 GPA . This incredible feat will be accomplished while taking a substantial 18 credits, only having classes on Wednesdays, and with the stipulation that he may skip lectures whenever he wants without penalty.

The Cornell varsity hockey team has always held its student athletes to a strict academic standards. Players are expected to attend regular tutoring sessions, have frequent meeting with teachers, and cheat “tactfully and efficiently.” Calling it a tradition “as old as Cornell Hockey itself,” head coach Mike Schafer says that, “All of our players are given straight A’s no matter what happens… I mean… uh… they earn their straight A’s…That is what they do.”

Varsity athletes at Cornell can have practices for up to 20 hours a week, requiring special accommodations. For athletes in sports, like hockey, that involve frequent travel, homework is optional, essays are written by professors, and tests are taken with answer keys, which are available in audiobook form if the athlete has difficulty reading.

Not all students have reacted positively to the news of another great enrollment period for varsity hockey players. “Are you kidding me right now?” Says CALS sophomore Rebecca Manson, “Why is this a thing?” However, Maclin believes that the exemptions for hockey players are necessary.

“It’s only fair that the players be rewarded academically for their performance on the ice. Last semester I had a 3.8 GPA and was accordingly awarded MVP honors on the soccer team despite never going to any games or practices or being on the team.”