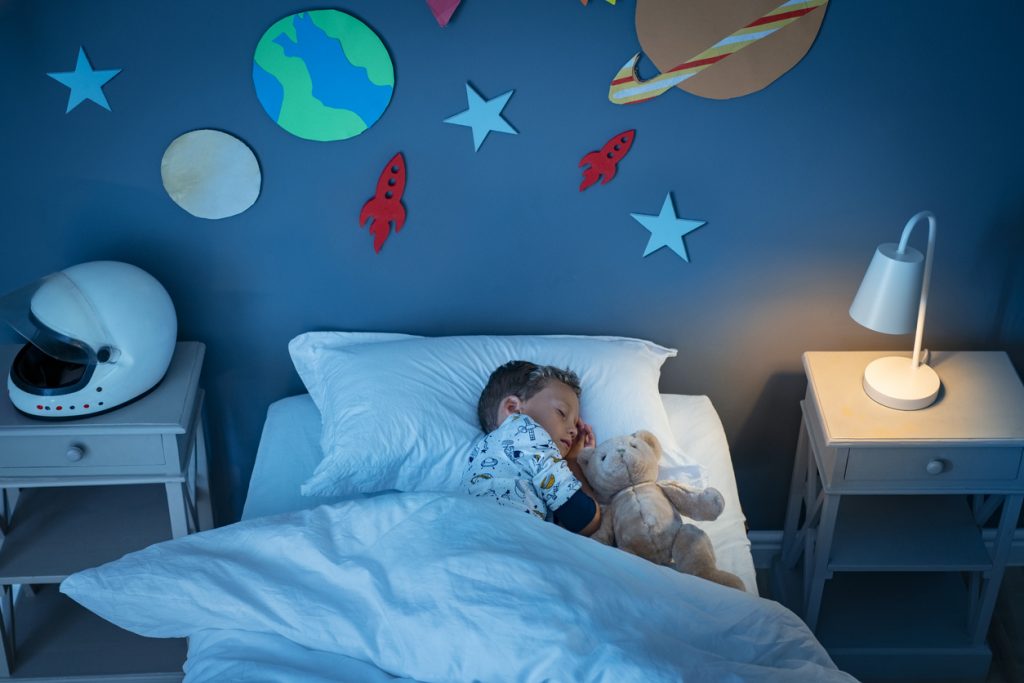 “After we made them give up their schedules, some engineering students threw temper tantrums,” said Engineering professor Alexander Shome ‘92. “Clearly, the college is not getting enough sleep, and that’s making them pretty grumpy. So we decided to help out, sending a professor and TAs out to each dorm to get them comfy, read them a story, and maybe bring them an Oreo if they promise not to get crumbs on the sheets.”

Reports have spread across campus of Engineering students breaking this new curfew by doing problem sets after hours, holding secretive study sessions, and writing lab reports. Campus police have cracked down on these secretive meetings, ensuring students get a solid eight hours by rounding up students, replacing their Mountain Dew KickStarts™ with warm milk, and blasting Mozart into Duffield Atrium at night. Some engineering students have expressed concern with this new campaign.

“This all feels so oppressive,” said Khalid Richards ‘22 while being offered Melatonin gummies by a nearby policeman. “We’re perfectly capable of deciding for ourselves how many credits are too much, and eight o’ clock is way too early to go to bed. Last night, CUPD broke into my room with a white noise machine and started playing rainforest sounds while I was trying to complete a paper. It was so distracting.”

Following the backlash, the Engineering School has promised to reconsider if students finish their vegetables at dinner all of next week. 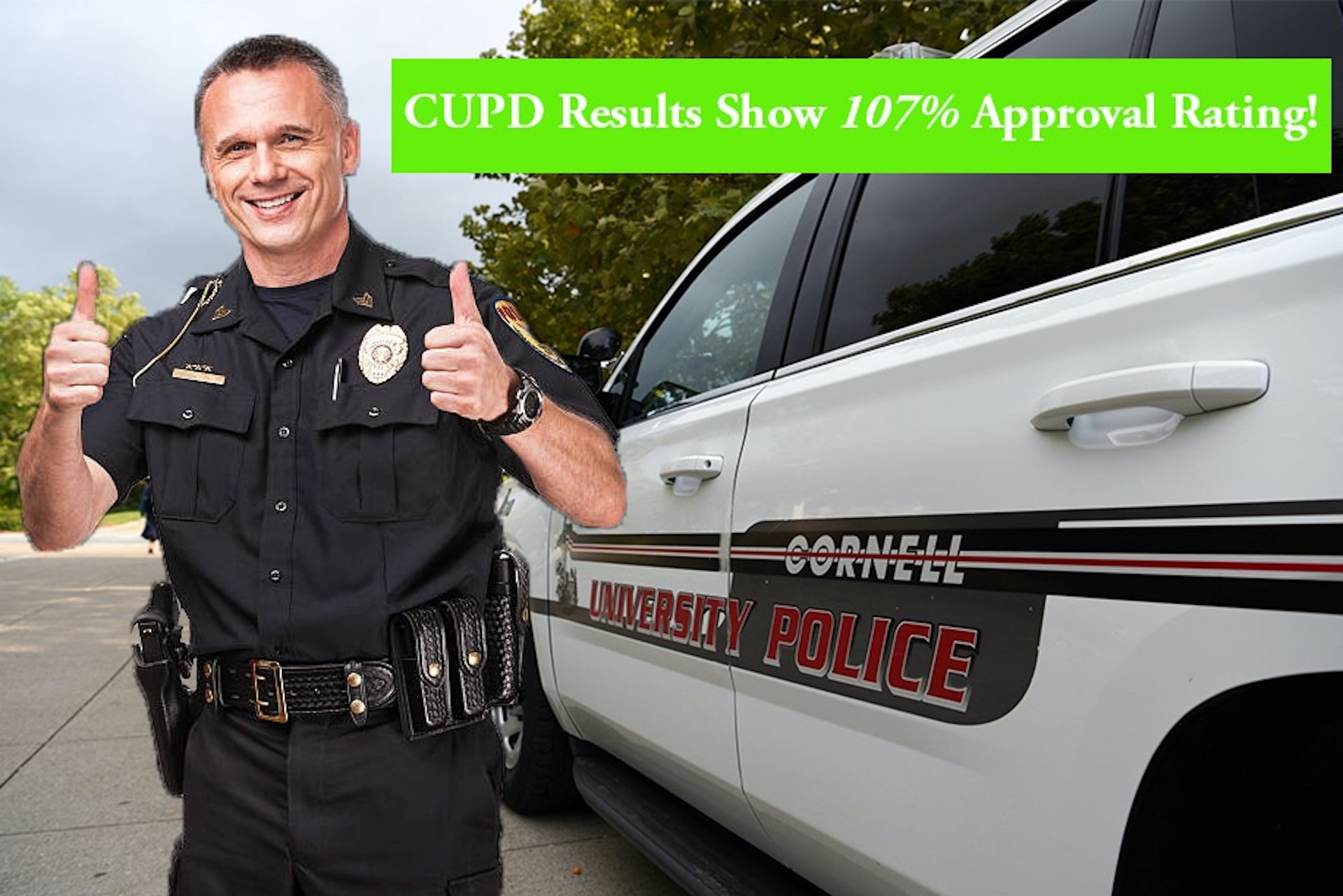 BARTON HALL—In a surprising display of unanimity, the Cornell University Police Department released survey results this past week showing a 107% approval rating of their performance in campus security.

“We had a great pool of 7 respondents, 8 of whom said they had absolutely no problem with police on campus,” Police Chief David Honan commented. “We were able to recruit respondents by looking for people with uncles who are cops or have a ‘thin blue line’ flag as their Facebook background in order to make sure these respondents were a good, upstanding group of citizens.”

The survey, which was distributed in response to calls for police reform on campus, also sought information about student mental health. Despite growing cries for expanded mental health services from the greater student body, though, the survey respondents unanimously agreed they were “not a bunch of wussies” and “didn’t need safe spaces”.

Honan assuaged students’ fears that there may be bias or inaccuracy in the survey results. “You can’t trust the polls nowadays,” he said. “Our methodology was foolproof: we flipped a coin 4 times, got heads 3 times, and then added a 75% margin of error, with tip included. That’s how Bayesian statistics works.”

Honan did not respond to questions as to how the survey obtained a -26% disapproval rating for CUPD among students of color. 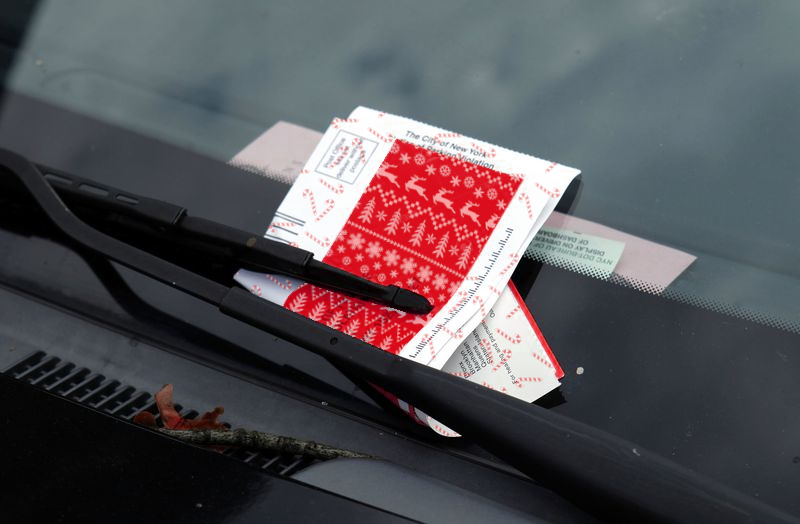 ITHACA—Hoping to bring some joy to what could otherwise be described as a bleak and tumultuous year, the Cornell University Police Department has decided to switch to holiday-themed parking tickets for the month of December.

“As days get shorter and people have gone months without seeing their loved ones, we noticed that folks have been down in the dumps,” noted a spokesperson for CUPD. “Our new tickets are meant to remind people of the holiday spirit and bring a smile to their faces. When you get a ticket, we’re not just reminding you of your legal trouble. We’re also saying happy holidays!”

Multiple versions of the tickets will be rolled out, unique to the offense. Overtime meter tickets will be emblazoned with popular character Frosty the Snowman. Double parking tickets now feature two reindeer pulling a Santa’s sleigh. Most festive of all are the prohibited area tickets, which are shaped like Christmas trees.

“At first the $180 worth of tickets I had amassed made me want to break down in tears,” commented student Jerome Hyunh ‘22. “When I saw the sticker ornaments and glitter garlands on my Christmas tree ticket, though, it reminded me there’s more to life than the overwhelming despair I felt at the prospect of having to pay rent late for such a minor mishap!”

Plans are currently underway to replace the typical siren emitted by CUPD cars with an infinite loop of “All I Want For Christmas Is You” throughout the holiday season. 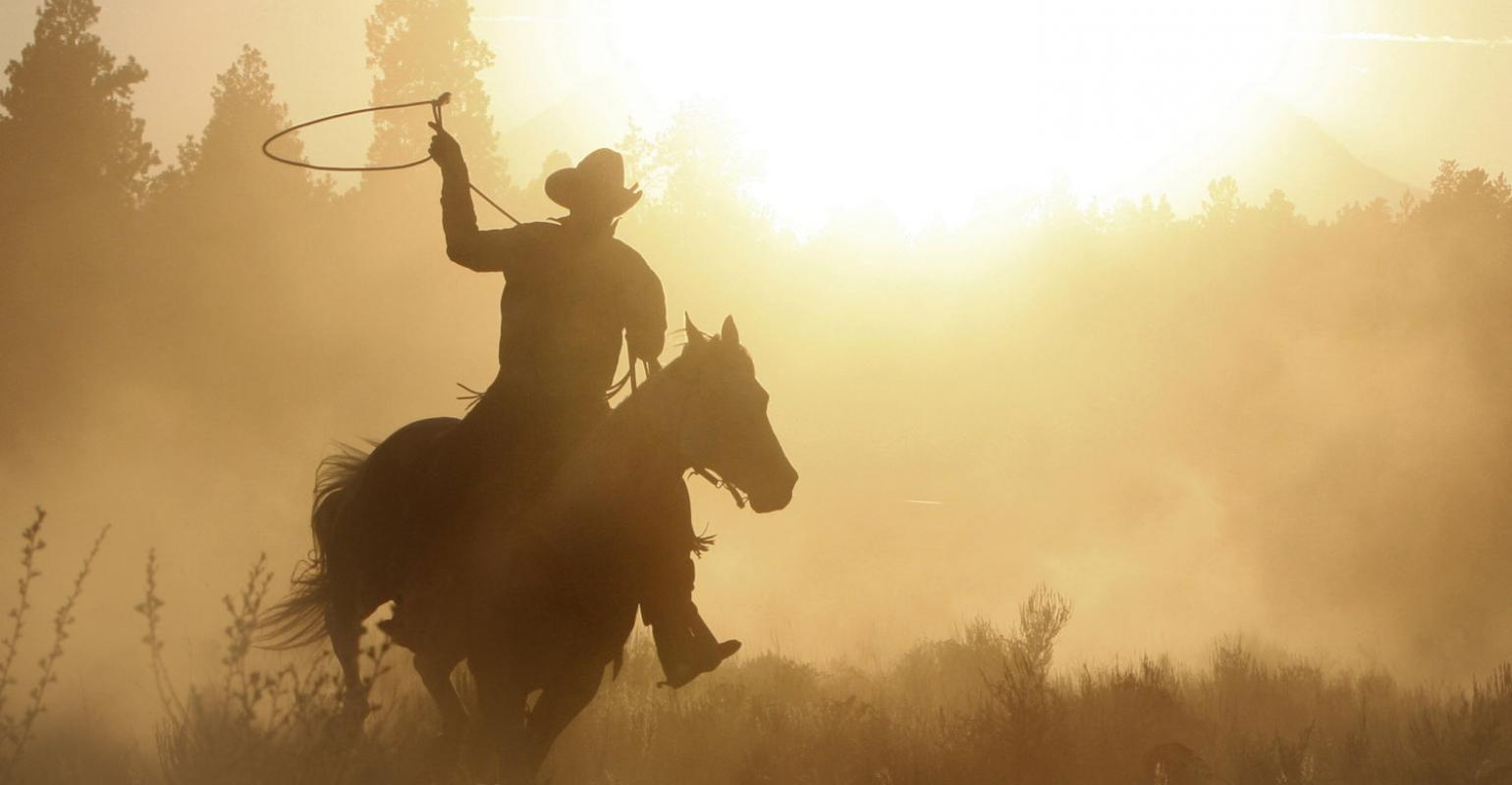 ARTS QUAD—Following the passage of Student Assembly’s CUPD disarmament resolution, out-of-retirement Police Chief Kathy Zoner was spotted responsibly locking away her firearm before holstering 10 feet of rope and taking to the streets on horseback.

“Her stallion was galloping alongside a speeding car on East Ave. She lassoed its tailpipe and pulled it into the Day Hall parking lot,” noted bystander Louis Parker ’22. “She then placed her 10-gallon hat on its roof before asking ‘who do you think you are stirrin’ up trouble ‘round this little ol’ town?’”

“She must’ve been waiting for this moment for years, right?” asked Sammy Peters ’23, who was busted for jaywalking across Campus Road. “I mean, does CUPD have horses? No, like seriously, have they always had horses?”

By Sunday afternoon, the cling-clang of her boot spurs struck fear into the heart of any local rascal within earshot. Zoner, who routinely removed her bandana to menacingly stare down her foes, had already rounded up dozens of ne’er-do-wells guilty of various campus infractions.

At press time, Zoner, sporting a customized saddle and golden belt buckle, tossed the rope over her shoulder, mounted her trusty steed, and silently nodded before racing down Tower Road and disappearing into the night.

WILLARD STRAIGHT HALL—After a long and contentious debate period, a majority of Cornell’s governing student body voted that out of all footwear options, the tastiest by far are Timberlands.

The discussion prior to the vote was marred by infighting and irregular procedure. Students wondered whether the Timberlands in question were the generic tan color and if they ought to consider the standard or fleece-lined model. COVID-19 restrictions sadly made the test-licking pair of Timberlands procured by the Student Assembly inaccessible to the majority of voters, although a few stopped by the boots’ top-secret on-campus location to “give them a big old sniff.”

While decisions on the deliciousness-factor of steel-toed work boots are normally scored on a rubric of salt, fat, acid, and heat, the Student Assembly opted to renounce this system. Instead, the S.A. debated how they believed the boot might taste, based on their understanding of other Twitter users’ professed boot palettes. An attempt to bring Cornell’s foremost boot-licking expert onto the call to answer questions was described as “literal violence” by an anonymous S.A. member.

This attention-grabbing issue has drawn to the forefront of campus discussions the importance of S.A. reform and the issues of effective representation, but somehow has not made anybody notice this happens every goddamn year. 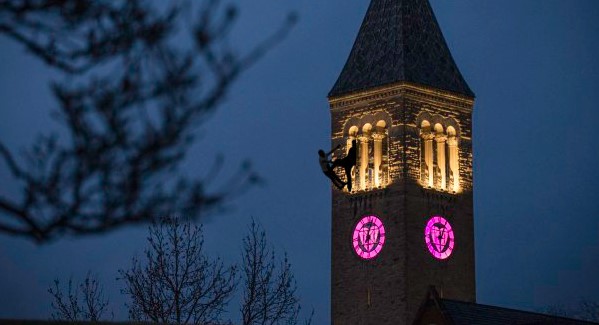 HO PLAZA—After repurposing a black satin curtain and a crowbar from the trunk of her ’97 Ford convertible, longtime police chief Kathy Zoner has left the Cornell Police force to take matters into her own hands.

Zoner’s intensity has only seemed to increase since her resignation, and many students are still adapting to the crowbar-wielding ex-cop’s vigilante activities. Jayvon Dreannen ’20 claimed to have seen a glimpse of her in Rockefeller Hall, attacking walls with her trusty crowbar. “It looked like she was wearing a cape. I’m glad she got rid of the asbestos, but it seemed a little over the top.”

Some of the vigilante’s other activities include standing pensively on the rooftop corner of the Physical Science Building while peering into the night, and sprinting up the Schoelkopf stadium steps four at a time for three continuous hours every morning.

Tanner Yorsonn, ‘22 had his own run-in with Zoner last Friday. “I was jaywalking on my way to class this morning and she just came out of nowhere. Before I knew it, I was being dangled over the Thurston Avenue bridge! She kept screaming at me, asking who I was working for, I was terrified! I can’t be sure if it was Kathy Zoner, but I will definitely be sticking to the sidewalks from now on.”

It is unclear whether “The Zoner’s” newfound vigilantism will shed light on the ex-cop’s motives, but she has reportedly been spending staring at Lake Cayuga while muttering the name “Rachel…” to herself on several occasions.

CENTRAL CAMPUS—The new Blue Light call boxes recently installed on campus are an architecture professor’s temporary art exhibit and will not connect users to the police, the University clarified Wednesday.

“I’ve decided to do my part to make Cornell more secure by creating an installation that forces viewers to ponder the true meaning of campus safety,” said Professor Tom Portman of his installation, which received funding from both the architecture department and the CUPD. “I believe this piece speaks to the core of humanity by evoking extreme emotions such as fear and panic, especially when someone’s calls don’t go through.”

“I don’t see the problem with these new Blue Lights. I always thought they were real pretty,” said CUPD officer Christian Markey. “Being honest, I didn’t even know they were for safety until you told me.”

Responding to complaints that the installation may be confusing, Police Chief Kathy Zoner said that students in danger should just suck it up and use their new app. 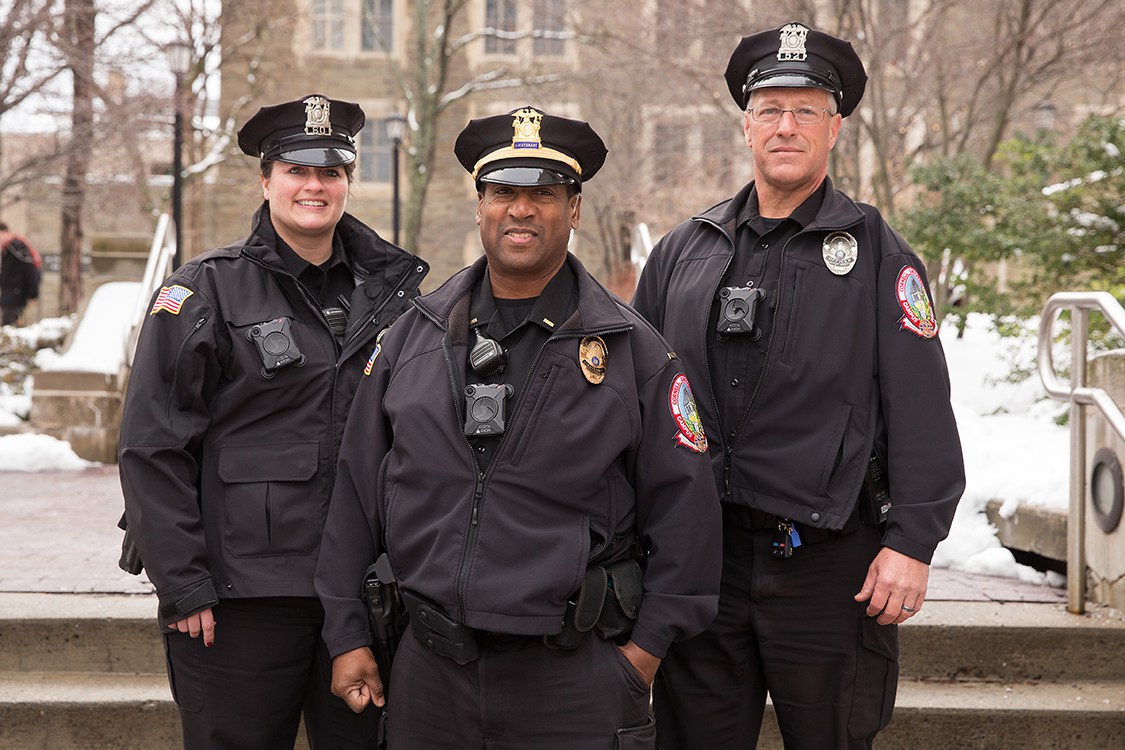 DAY HALL — Following increased calls for transparency, CUPD has decided that in addition to using body cameras, it will Snapchat every arrest it makes in an attempt to gain the trust of the Cornell community.

Under the handle “coolcopz”, Cornell’s finest will keep their Snapstory updated with a constant feed of misdemeanors and faceswaps with felons. “But we understand that gets a little heavy, so we’ll add cute snaps of our drug dog, too,” promised Officer Greg Linder.

“Snapchat would allow us to send shaky ten-second videos of criminals in action with a geotag,” said Chief Kathy Zoner, explaining that this could help CUPD connect with students in a familiar and relatable way.

“By sending mass snaps, we’re building a relationship with the student body that allows for greater accountability,” said a confident officer before choosing the flower crown filter, pursing his lips into a “duck-like” formation, and submitting his selfie to the Ivy League Snap Story.