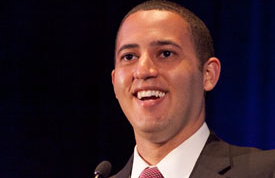 ITHACA- Sources confirmed late Tuesday that Ithaca Mayor Svante Myrick’s desire for a snow day on Wednesday had in fact come to fruition. “I made a wish and it came true!” exclaimed the bright-eyed and simple mayor, dancing around the kitchen of his Collegetown apartment, dressed in inside-out and backwards pajamas. “Woo hoo! No school! I can’t wait to play in the snow all day tomorrow!” Additional precautions taken by the mayor and class of 2009 graduate included putting his shoes outside, flushing ice cubes down the toilet, and spinning around ten times in each direction. “Mom’s going to make hot chocolate and I’m going to sled all the way down East Seneca Street,” added Myrick. At press time, Myrick added that despite having secured the snow day, he would not forgo sleeping with a spoon under his pillow.