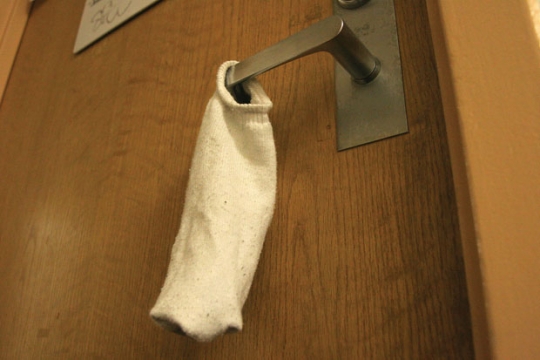 ITHACA– Reports are surfacing that on Sunday morning, current freshman Eric Holt woke up to find himself sleeping on a couch in his dorm’s lounge rather than in his bed.  Within a few seconds of waking up, Holt remembered why: he had been sexiled, or sexually exiled, by his pre-frosh guest, Jonny Dixon.

The previous night, Eric had decided to give Jonny a taste of typical Cornell nightlife, taking him around Collegetown to multiple bars and showing him the ropes. However, it was at Loco that Dixon hit it off with a girl witnesses are describing as a “Cornell eight” and shortly after meeting her took her back to Eric’s Jameson dorm room.

Eric was rather upset, since, he’d been trying to “get it in” all semester, and then “this kid Jonny comes up for one weekend and hooks up. I mean, good for him, but c’mon, show some respect for your host; it’s my room.” Holt went on to attribute his Cornell Days guest’s success to “beginner’s luck,” adding that he “better not have used my toothbrush.”

Jonny could not be reached for comment, as he was still asleep in Eric’s bed.