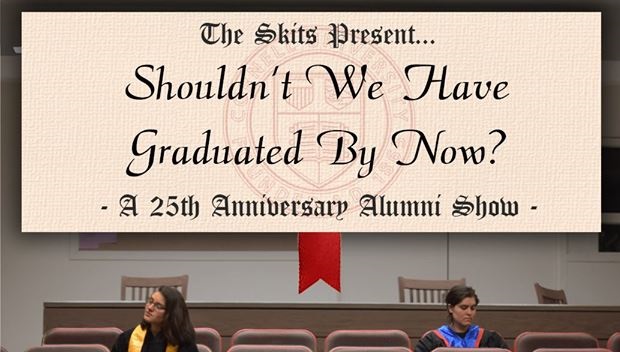 This post is sponsored by The Skits. Go see The Skits Present: Shouldn’t We Have Graduated By Now – A 25th Anniversary Alumni Show, Saturday, March 10th at 9:00pm in Barnes Hall. Tickets are $5 and available at www.theskits.com or by emailing skitscomedy@gmail.com

“I don’t get it, we did the same exact sketch where we made Balch Hall an elaborate kitchen 25 years ago, and the bit killed! I remember Candace made a damn good sandwich joke,” said Johnson.

Current Skits members noted their discomfort working with Johnson for his archaic manners, such as referring to female members as “broads” and advising them to smile more for the actual show.

“Yeah this guy really seems stuck in the past, but he’s our founder so I couldn’t stop him from coming. He even kept incorrectly referring to Jared as club president,” said Jackie Parcells ‘18, current Skits president.

After several groans and a prolonged silence during practice runs, the comedy group has decided to also cut Johnson’s second skit about the Native American program house being an ancient burial ground.