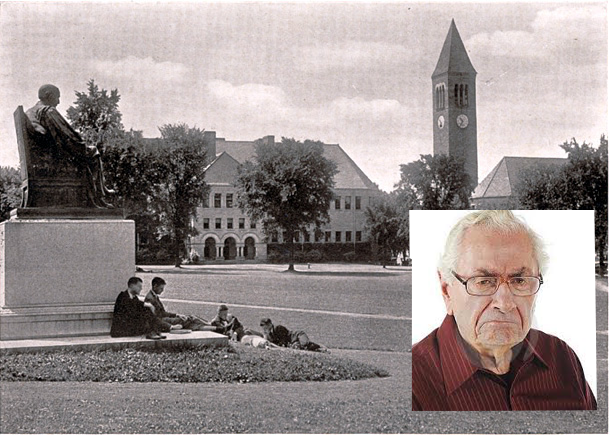 SILER CITY, NC—In response to a Cornell Daily Sun article on campus diversity initiatives, Facebook user Alfred “Al” Dickinson ‘55 utlized the comment section to express his desire for a return to a bygone era in the university’s history—one that was apparently strongly reminiscent of the American South during the first half of the 20th century.

“Back in my day, we didn’t pretend like everyone belongs together all the time,” wrote Dickinson. “Cornell was best when my people lived up on the hill and those others lived down below. Now look at this mess! Ithaca? More like Itha-zuela!!!”

University records indicate that Dickinson, 87, graduated from CALS in 1955, although his Facebook profile indicates that he attended “The School of Hard Knocks.” Dickinson was born outside Fayetteville, Arkansas, and grew up on a sizable cotton farm owned by his father, Stonewall Dickinson, who also managed the only nearby convenience store. He later inherited the farm but moved to Siler City when Fayetteville got too “colorful” for his taste.

“Today’s Ivy League students are so dirty and lazy,” Dickinson continued. “The school lost all of its reputation from back when it was pure. It really disgusts me how all this ‘diversity and inclusion’ bullshit is putting black marks on Cornell’s snow-white reputation.”

At press time, other Facebook users braced for Dickinson’s inevitable screed after the Daily Sun posted an article on the SA disarmament vote.