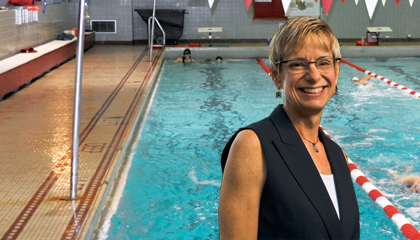 TEAGLE HALL — After failing to swim the requisite 75 yards, Elizabeth Garrett was disappointed to announce she had not passed the water safety competency test enforced by the University. She will now need to enroll in PE 1100 – Beginning Swimming and pass the course before the end of her tenure, in order to officially retain her title as Cornell University President.

“I never learned how to swim,” Garrett was disheartened to reveal, “it just never was something that ever was important during my thirty years in academia, but it looks like I’ll just have to learn it now.”

Garrett reportedly did okay by doggie paddling the first lap of the pool, but struggled on her backstroke, after which she treaded water as best she could while the supervising lifeguards fished her out of the third lane.

Said Jacob Gittleson ’19, who was next in line after President Garrett, “it was sad, really. I didn’t know whether to jump in and help her out or wait for the lifeguards.”

While taking the swim course this semester will be an inconvenience, Garrett commented that she at least was able to use her AP credit to place out of one First-Year Writing Seminar.