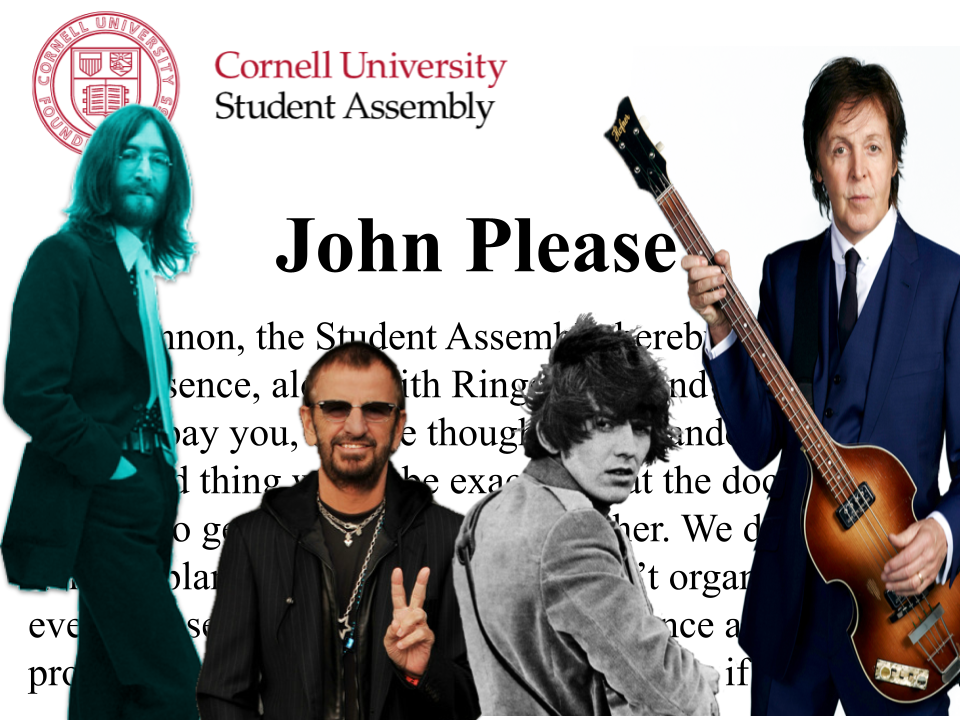 LIBE SLOPE— In one of their most desperate pleas for attention to date, the Student Assembly has decided to meddle in Slope Day, cordially inviting one of the most commercially successful bands of all time to work unpaid for a bunch of undergraduates behind the backs of actual event organizers.

“Planning Slope Day on a limited budget is a huge task, and we appreciate everyone who has worked on it thus far,” said SA Representative Alina Clapton ‘22. “There are so many considerations to make, like payment, security, event timing, and more. Our solution was not to consider any of those things and treat this like a third grade birthday party clown reservation.”

Beyond the absurdity of the proposal itself, one final hurdle exists to getting the band back together: two of the four members passed away decades ago, including the addressee of the SA’s gambit. The Assembly’s legislation accounts for this, however, offering the band “their lifelong gratitude” if the band could find it within themselves to defeat death itself. Leaders of the Slope Day Programming Board have expressed their distaste at this move.

“What the fuck?” asked Slope Day planner Alex Lammers ‘22. “First of all, what the hell makes them think they can just make changes to our event without asking us? I thought the SA was insufferable when they took themselves seriously, but those power-hungry resume padders are even worse when they pretend to be funny. Even if the Beatles return from the dead, that means extra security and a ton of extra costs. And the music would suck! Who wants to hear a bunch of 70-year olds sing about holding hands and being British?”

Responding to requests for comment, representatives claimed that they were “close personal friends and enthusiasts of John” and promised to consider the concerns of event planners, unless of course that consideration meant anything that would negatively impact their resume.